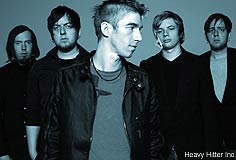 Codeseven, the North Carolina-based post-hardcore band that experimented with more spacey sounds and textures a la Cave In in the later stages of their career before breaking up in 2005, are reuniting. They'll celebrate with an Aug. 20 show at the Green Street Club in Greensboro, N.C. and then embark on a tour in the fall. More info about the tour will be available shortly, and while we can't tell you who it will be with just yet, we can assure you it's a good one.

"This is a full-fledged reunion," Codeseven's Eric Weyer told Noisecreep. "We're doing the show and then we have a tour planned in October through December and we'll be getting the dates within the next week." While the reunion show will feature singer Dave Owen, who left the band after the release of 1999's 'Division of Labor,' the tour will not.

Weyer said that timing was the reason for the reunion after a half-decade hiatus. "The timing was right," he said. "We miss playing songs, playing out. We had Telescreen, which was everyone from Codeseven but Jeff [Jenkins], and we did that for a while and we couldn't get our ideas out the right way, and we had big plans for it but it crumbled. Now everything is lined up right, and we're like, 'Let's play music and let's have fun.'" The band had broken up, because despite lots of time on the road, things just weren't falling into place. It wasn't a bad breakup; just a necessary one at the time.

Once the band announced the one-off reunion show, they were immediately offered a killer tour. "We could not pass that up, so that helped us decide that this is a great opportunity, to step right into the spot where we left off. We are going to play a mix of songs for the reunion. We will play stuff from 'A Sense of Coalition' and 'Division of Labor' and 'The Rescue.'"

In the meantime, the band is rehearsing and "experimenting" with new stuff, but they're not in full-on writing mode or anything like that. Weyer said, "We're going to do the show, do the tour and then try to write another record. We'll see how it goes. Ultimately, that is the goal, to hopefully put a new record out. We are going to leave it open. We all feel pretty positive."

Despite the five-year break, Weyer can imagine what direction the band, who had shifted to a spacier, less-aggressive style towards the end of their career, would take now. "It would be more hardcorish and more experimental/spacey, like 'The Rescue,'" Weyer said. "I know all of our albums are different and that can be confusing, but you grow and try different stuff. We don't want to play the same s---. We want to see what else we can do. I have a feeling it would have some edge to it, if we wrote new music. It would probably be heavier than [final album] 'Dancing Echoes/Dead Sounds,' for sure. It would still have the experimental spaciness in parts, but with more of an edge. It would be a high energy album."

As to what the band is looking forward to in regards to the reunion show, Weyer said it's everything. "The whole nine yards," he said. "Playing a show. Seeing the crowd reaction. We have done well around here, We all miss playing. We missed the whole thing."