It's tough to pick up a print music magazine at this point in time and think of it as a legitimate channel of information and not some hunk of crap done up in the name of novelty. I guess in these days where an artists' entire catalog can be downloaded, evaluated and reviewed in the click of a mouse, we forget the joy of gripping a hard copy magazine, going into the john and learning a thing or two. This is where the fine gents at the magazine Chips & Beer come in to save the day and school us good.

Started in 2011 by the minds behind the Left Hand Path website, the magazine is an overstuffed tome to all things Metal with an attention to detail and a devilish enthusiasm that's lost in the more 'overground' glossy monthlies you find these days.

Noisecreep was so bowled over by Chips & Beer's latest issue (#4) with it's Ozzy Osbourne primer and horror movie soundtrack round-up that we got in touch with the mag's editor Stewart Voegtlin to get the skinny on this labor of love and here's what he had to say.

I know that Chips & Beer sprung from the Left Hand Path site, but what was the inspiration to take the aesthetic of the site and put it into a print magazine?

When we - me, Todd DePalma, Chris Alpino and Justin Alpino - started Left Hand Path, our idea was to bundle the content into PDF and print it like a tab, on newsprint. If you look back at Left Hand Path's first couple of years, each review or essay was tagged with an edition number. I was employed as a weekly newspaper editor at the time, and it was no big deal for me to flow reviews and other stuff into Quark and send it off to be printed. Chris is a designer by trade, and had worked with newspapers too. So it was just kinda imminent, and then---for whatever reason---it never materialized.

Chips & Beer happened solely because of Dave Adelson at the 20 Buck Spin label. I was really sick of writing online in both paid and unpaid capacities and DePalma and Alpino and I had less and less time to bang out reviews and get it proofed and online. The nature of online publishing is Malthusian. If you aren't running content out two, three times a day, you get less and less views. That's where lists and bizzaro world stuff like "Women in Metal" and "Best Metal hamburgers" comes in. That's just not us. Never was. For Left Hand Path to survive, it needed a new environment. We are the "boy in the bubble."

So, for whatever reason, Dave proposes to take Left Hand Path to print. He frames it as Forced Exposure for metalheads. I was hesitant because I'd spent nearly a decade working in print. It can be a real nightmare. There's so many things that can---and do---go wrong. But when Dave told me he also came from a print background, I was like, 'OK, Why Not?' Todd and Alpino were down. And then we rounded everything out with Pat Delaney, Adam Ganderson, Hutch Bannister, and Beaver. 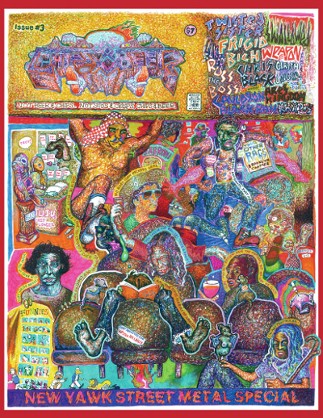 Was it tough to bring what you did at the Left Hand Path site to the printed realm?

Translating Left Hand Path into print didn't really work as easily as I thought it would. First issue work was like crawling blindly through a cave system. All communication was done via e-mail. It got hairy. It got weird. It's still hairy and weird. But eventually we grew accustomed to the blindfold and everything kinda came together after issue #2.

What are some of your favorite pieces that you've run thus far?

All of the primers have been fun. They give us a reason to wallow in bands, and we all like to wallow. The New York Street Metal primer in #3 is my fave one so far. All the atomisitic bits of it are separate universes. Adam's recasting of the first 100 years of KISS' rule as a "Psychosexual Space Odyssey" is one of my fave pieces of music writing ever.

Todd's Chris Black interview is perfect. There's no where left to go there. His piece on Slayer's South of Heaven in #4 is incredible, too. That's a record that I just loathed when it came out. It was Slayer's "Judas" moment for me. I did my best to avoid it. And then Todd rolls out this killer apologia re: South of Heaven and I'm like nodding with every line. I love when that happens. It's a testament to the writer when your bias is dissolved. Shows you how potent words still can be.

What are some of your dream pieces you'd like to include in future issues?

Every piece is a dream piece. It was a dream to get an interview with Jay Jay French, King Diamond and Bob Daisely. It was a dream of mine to have Kriss Hades get outta the bottle long enough to reply to one of my countless e-mails. It was a dream to be able to write a billion words on Possessed's Seven Churches. Every time we can all (virtually) get together and pay homage to the riff, it's a dream, man. A big wet one.

What do you think separates Chips & Beer from the more mainstream metal print mags?

Absolutely everything. Mainstream print is about giving everyone a trophy. It's feelings. It's "Made Me Smile." It's a "Great Group of Guys." It's "Not Necessarily metal per se, but shares likenesses with..." It's glow sticks and the rave and a lot of ego stroking. I've never read a one-sheet that moved me in a positive way, and that's all mainstream metal mags are; one-sheet regurgitation, and everyone covers the same bands, same records. There's the glossy cover with the new, big band on it, doing the metal pose, looking Praise Hell Satan etc.

We don't softball. We ask honest questions. Sometimes we rock the boat. Sometimes it makes the dog-&-pony show a lotta fun. Then Beav checks the copy out, channels his Id, and comes up with illos that ain't that dissimilar from Rob Bottin's work in The Thing. When the dust clears, Beav draws each cover by hand over like a day or two and then it's off to the printer. Not your ordinary "brick & mortar" hive-mind camp.

What do you think is the future for niche print magazines?

Niche mags should, in theory, thrive. But... I mean, who knows? Does anything art-based have a bright future? I'm not too hopeful, but if and when the ship goes down, I wanna be right there in the middle of it, crushing a tall, and spittin' a dip in Odin's one good eye.

Will Chips & Beer ever do any sort of 'incentive' projects -- like vinyl or compilation CD's -- with the mag as it goes on?

I doubt it. That's the legerdemain of the glossies to sweeten the deal. We don't need parlor tricks. If you don't want to read about the first 100 years of KISS' rule as a "Psychosexual Space Odyssey," you've got no business getting your fingers dirty with Chips & Beer. 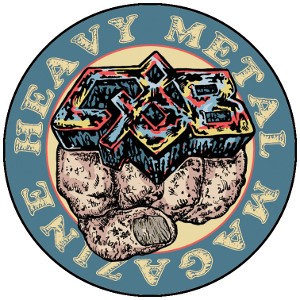