Comprised of Chris Zeischegg and Chad Fjerstad (formerly of Victory Records artists Dead to Fall), Chiildren is a new(ish) duo specializing in a strain of industrial metal that lassos in elements of black metal and post-rock. Noisecreep first encountered their music when our friends at Metal Sucks posted Chiildren's "Girl in the Dirt" video earlier this year.

Based in Los Angeles, Chiildren just released The Other People, their debut EP and the kind of record that everyone from the staunchest indie metal geek to the older, old-school industrial fans could rally behind.

'Girl in the Dirt' is one my favorite music videos of the year. Did you use your adult film connections to make the clip? It looks really great.

Watch 'Girl in the Dirt' Video

Tell us about Chiildren's sound. I hear Wax Trax Records, early '90s-styled industrial in there, but there's also a strong, black metal bent to it.

Zeischegg: My background is primarily in metal and metallic hardcore. I grew up listening to bands like Botch, Converge, and Neurosis, etc. Even when we started this band, I was influenced more by contemporary black metal like Wolves in the Throne Room. I think we initially planned to be more of a traditional melodic black metal band. But we couldn't find a drummer. So we started experimenting with programming drums and adding the electronic elements that make up our sound now. For me, personally, my knowledge of older industrial music started to grow as we developed this project. I was pretty ignorant beforehand.

Chad Fjerstad: Although my prior experience as a musician has been strictly in metal bands, I have been more personally intrigued by synthesizers and electronics since about 2005 when I started feeling more moved by groups like Air, Zombi, and The Faint. Although the very first concert I ever attended was a Rammstein show at the age of 14, and I've always known about acts like KMFDM, I was never particularly drawn to the more industrial side of things until now. I think we just ended up with parts that unintentionally channeled a bit of that vibe, which I am enjoying.

What inspired you to name the band Chiildren? There's something kind of creepy about it -- in a good way.

Zeischegg: I think I suggested this to Chad because it was a weird juxtaposition to our adult industry personas. I also felt like we both kind of lived like children. Or at least I felt this way: don't have a "real" job, think about sex all the time, constantly pursuing my own little art projects, and living in my head. Chad kind of conceptualized the reason for adding an extra "i" to the name.

Fjerstad: Chris suggested the name. There was the fact that the project was born from Chris's ideas and songs, and the fact that the name actually had legit meaning for us personally, so I agreed to it immediately. We added an "i" to the name to separate ourselves from the NYC thrash band, Children, who also currently exists. The ii's work because they represent two entities, going along with the concept of multiple children rather than just a single child. Also, the ii's are a bit of a throwback to old computer technology, ASCII, which goes along with the electronic aspects.

Are you guys planning on touring and all of the other stuff one expects from a band or is too tough with your work schedules?

Zeischegg: We would like to. Given that neither of us are from LA, it's been a little hard to get acquainted with the local scene here. When we did start playing shows earlier in the year, it was cut off abruptly when we blew up our PA speakers at a guerilla show we played in some office parking lot. We recently bought new speakers and started practicing again. I think our first show back is at Boardner's in Hollywood, on Nov. 21, 2011. Once we're back in the swing of things, we'll likely do some little tours. Probably next year.

What has the reaction to your music within the adult film community?

Zeischegg: I honestly don't know. Our friends have been supportive, but we haven't made a big deal out of it in the adult world. 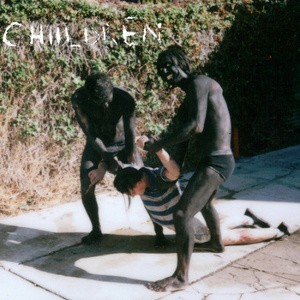 Chiildren's debut EP, The Other People, is out now via Bit Riot Records and available on iTunes and Bandcamp.