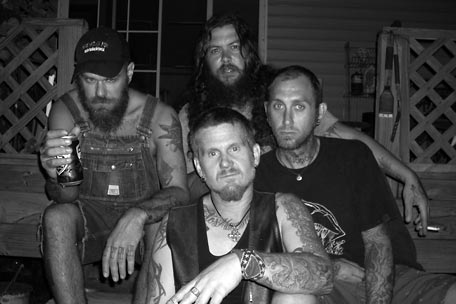 Buzzov•en's reputation for violent live shows, drug addiction, and breakups is legendary in certain circles. Lead by vocalist-guitarist Kirk Fisher, the North Carolina sludge metal specialists certainly live up to the extreme lifestyle described in their lyrics. Channeling influences like Black Sabbath and the Melvins, Buzzov•en take the former's doom-ier characteristics and throw in touches of Southern rock and punk.

Buzzov•en have recently mobilized to release an album entitled 'Revelation: Sick Again' on March 29th. After one listen to the new record, it's clear that even though Buzzov•en have been slugging it out for 20 years, time has not softened their songwriting. Noisecreep is excited to present an exclusive premiere of 'Drying Out,' a song from the new record.

Listen to 'Drying Out'

'Drying Out' is quintessential Buzzov•en, featuring Iommi-ian riffing and Fisher's classic damaged-throat vocal attack. The singer cryptically told us that the song's lyrics were inspired by "the use of chemicals." Since we're already familiar with his past drug consumption, we don't doubt Fisher's statement one bit.

'Revelation: Sick Again' will be out March 29th on Hydra Head Records.