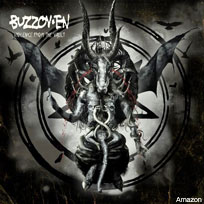 Orion Landau, who was featured a few months back on Noisecreep's Album Art of the Week for his work on Revocation's 'Existence is Futile,' returns to the feature. Relapse Records' resident designer has lent his hand for Buzzoven's 'Violence from the Vault,' an EP compilation of unreleased tracks from the 'Sore' recording session in1994.

Landau's preference for blue can also be seen in his other pieces, like Origin's 'Antithesis', Obscura's 'Cosmogenesis' and Mumakil's 'Behold the Failure.'