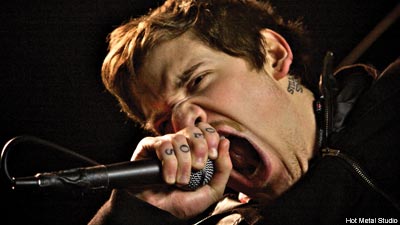 "This is the unglamorous side of Endeavor Media," producer Danny Yourd said while setting up to film the video for the Devil Wears Prada's 'Assistant to the Regional Manager.'

It was a cold Pittsburgh winter day, even under the roofs the hangar-sized warehouses at Mind Mogul Studios. Making the shoot for the track from the band's 'With Roots Above and Branches Below' release poignant was that it landed on Groundhog Day. Just like Bill Murray's detestable weather anchor in the holiday's namesake film, those involved had do things again and again and again, until they got things right, as it is with any video shoot. 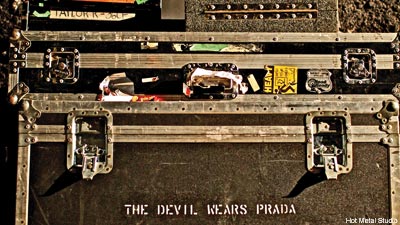 We know that the video would be something different for the band and borderline controversial. Even up to the day of the shoot the band wasn't completely sure of what Endeavor had planned.

"[Endeavor] showed us the video for the Nine Inch Nails video for 'I Want to Eff You Like an Animal' or whatever that song is," vocalist Mike Hranica told Noisecreep, during the silence in between takes. "It's real weird, just strong imagery and stuff, like hanging people ... And being a band that isn't like Nine Inch Nails we have discretion. We wanted like an industrial vibe more than like a dirty, dusty vibe." 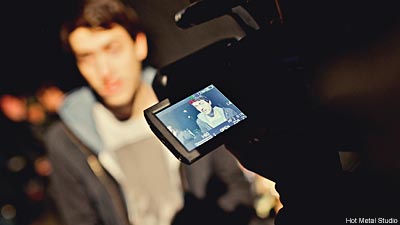 A trip to the women's bathroom shed some light on what was to come. Inside the comfortably warm and close quarters of the tiled room, two makeup artists sprayed white body paint on a scantily-clad man and woman. The female talent, Erin Carey, is a local actress, but for this project, she will draw upon her skills as a circus performer and acrobat.

"They want some movements that were kind of contorted," Carey said. "Interesting, odd, forms of the body. So I think I'm going to be kind of moving slowly, twisted movements." 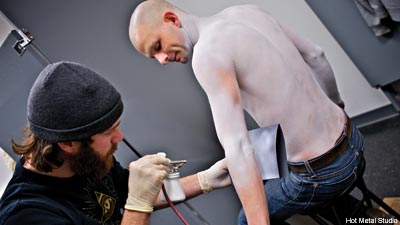 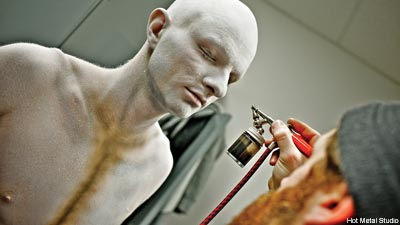 As the concept talent prepared, the crew filmed the band members individually, with minimalist scenery and a solitary, overhead camera. The band, fresh from hauling straight from Ohio, appeared anxious yet maintained the obligatory good cheer of a group of young men on a road trip. 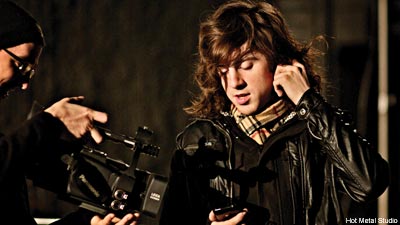 Guitarist Chris Rubey noted that "it was gonna suck" just before his first take, and he quipped continually throughout the day that he "jinxed" the filming because he had remarked at the outset that it would be an easy time. At one point later during a take, the music was so loud that it shook one of the many computer hard drives on the set, causing the recording to drop frames. Despite this minor technological flub, most of the recording went without much obstacle. 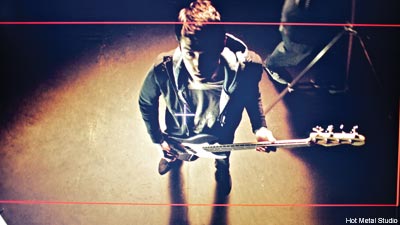 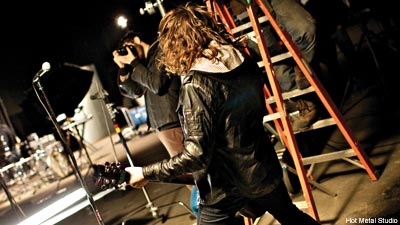 Though the video lacked a coherent storyline and used the raw aesthetics of a pair of pale white, contorted bodies, Hranica had much to say about the lyrics to 'Assistant.' "This song is about being a band based on like a Christian foundation," he explained. "Any Christian band will have songs about finding God or about God in general. I get messages from Christians that are like, 'Man, I'm struggling. I'm having a hard time like ... I started doing this and I knew it was wrong, and now I need to get back to it.'"

"Christian bands should write songs like that," Hranica said. "It's about people that have found God but -- and it's actually a lot off the new album: just working, just keep pushing, keep climbing towards it, and persevering -- from the perspective of being a Christian but struggling. And that's what this song is about."

The Devil Wears Prada are currently on a narionwide tour with Killswitch Engage and Dark Tranquility.