Spring is upon us and its gearing up to be banner year for all things hard, driving and metallic. Already, the Mayhem Festival tour is shaping up to be bigger and better than ever, Iron Maiden is set to clobber North American shores and Metallica themselves are even threatening to head into the studio.

Of course, the releases are starting to pile up with the likes of Killswitch Engage, Clutch, Volbeat, Terror, Anthrax, Kvelertak and Rotting Christ, amongst a horde of others, already dropping their share of volume-dealing, eardrum-assaulting discs with a host of others wating in the (black) wings.

Here's ten albums currently making a racket 'round Noisecreep hallowed halls you should be ready to part with your hard earned cash for. Believe us, you won't be disappointed. 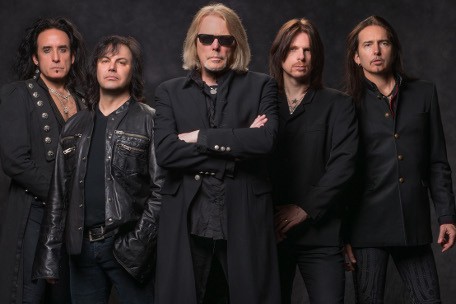 By any other name, Black Star Riders is simply Thin Lizzy revamped and reborn. Word is that All Hell Breaks Loose was initially going out as a proper Lizzy disc 'til Phil Lynott's estate put the kibosh on the band using the name. Now according to lead guitarist Scott Gorham, the reason for the re-christening was "out of respect to Phil Lynott and the legacy he created." Don't much matter either way. The 'Riders' Nuclear Blast debut isn't merely respectful to Thin Lizzy's legacy, but takes up the legendary mantle with vigor. Now after a couple years fronting the band, former Almighty dude, Ricky Warwick sounds perfect in Lynott's spot. Give a listen to the album's online teaser track, "Bound For Glory" and see if there's any question just who BSR really are. 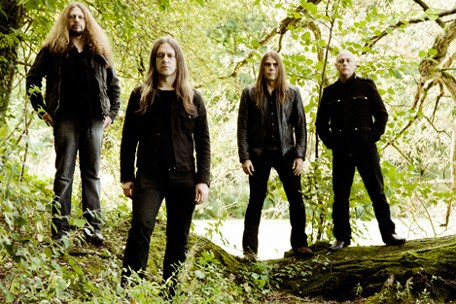 "We wanted it to sound final," says Cathedral mainman/Rise Above Records boss Lee Dorrian. Indeed, with The Last Spire Cathedral will breathe their last after 21 years as the loping sound of a doomed and damned generation. Where recent Cathedral discs did their best to plumb the twists and turns of classic rock and '70s psych, the Brit doom institution has returned to the slow, simplistic and mournful sound of the band's 1991 debut, Forest of Equilibrium. "We wanted it to be focused," states Dorrian. "Like writing your last will and testament." 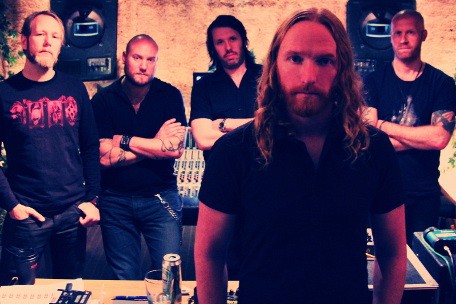 If ever a band lived up to the tag "Swedish Death Metal", Dark Tranquility would take the crown (and that's not a reference to the great Swedish band also named The Crown). Now after ten albums practicing their melodious riff-loving art, they've delivered another great Dark Tranquility album! (what else?). While Construct does nothing to flip DT's deathly script, it's still proves these Gothenbergers have plenty of fuel left in the tank.

"This ended up being a more focused effort with emphasis on the strength of the individual parts in each song, as well as the overall feel," states vocalist Mikael Stanne. "We wanted the melodies to drive the songs, and all instruments should go for the same goal. So we wrote the foundation of each song with that in mind, and then everybody brought his best to the recording process. There is an honest, straightforward feel to this album that I am very proud of. No unnecessary flavors, just the raw distilled essence that is Dark Tranquillity."

One of Us Is the Killer, Dillinger Escape Plan (May 14 on Party Smasher/Sumerian Records) 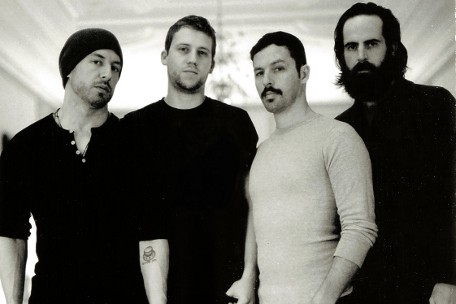 What becomes an underground legend like the Dillinger Fucking Escape Plan the most? For starters, these tech-metal-avant-noise iconoclasts continue to exceed their own gold standard for hyperkinetic sonics with their Sumerian/Party Smasher debut, One of Us Is the Killer. To follow that up, they'll be blasting the shit out of U.S. audiences all Summer as part of the Summer Slaughter roadshow. And to think, mainstream types like Conan O' Brien and Rolling Stone are just getting hip to what the underground has known about for years now.

"As this band has grown and evolved through out the years our passion and energy for what we do has not only been amplified but has become more focused," says guitar-abuser Ben Weinman. "One of Us Is the Killer was not an easy record to make. But then again, nothing Dillinger does is every easy. We know that our music isn't for everyone but we also know we are challenging people in different ways. There is no better time in music then now for confrontation and you are either with us or against us." 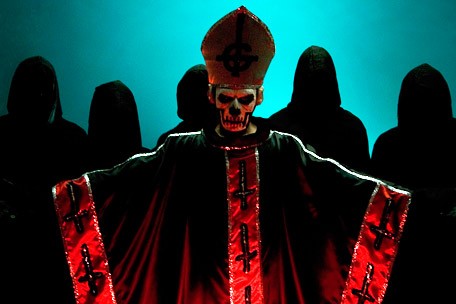 Clearly, the devil has the best tunes. Just ask Papa Emeritus (the dude in the Papal regalia that didn't get the gig Rome) and his backing band of self-christened Nameless Ghouls. On their much-anticipated sophomore slab, Ghost B.C. pillaged the crypts of classic rock for bel canto chorales, Blackmore-inspired guitar workouts, and sunny psychedelic harmonies to make a record befitting His Infernal Majesty - as well as the folks at Universal who handed 'em a reported $750K.

To realize this new, hardly commercialized re-write of the satanic heavy metal rulebook, these unlikely cult heroes relocated to the unlikely locale of Nashville, Tenn. to channel Infestissumam's retro vibes. "There is always an element of disturbance when recording close to home, which is why most bands find it inspiring to go somewhere remote in order to be fully focused on the recordings," says one of the Ghouls about recording outside their native Sweden. "Nashville is a very musically vibrant city and even though it might not be synonymous with our personal favorite artists, it still resonates a great deal of musical history. Our civil appearance also made the experience an educational one, because we didn't know that "Faggots!!" was a greeting phrase in Nashville."

Forgive them Papa, they know not what they've done. 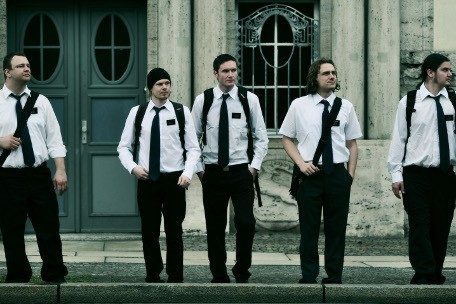 While it seems like Germany's Heaven Shall Burn will probably never set foot on Stateside soil (And why should they? They're festival-topping Metal Gods in The Fatherland), U.S. fans can love them even more from afar as they muscle up their far-from-stock metalcore leanings with more than a few Teutonic twists n' turns including an unexpected (and kinda awesome) cover of Blind Guardian's "Valhalla."

"It´s the most emotional album we've ever done," admits guitarist Maik Weichert. " It delivers a lot more aggression, but there are very melancholic parts as well. We really think this is the best production we've had so far. It´s clear and powerful but still has a human feeling...We already played a few songs off of the new record live, and kids loved it - that is the ultimate test - if a song does not work live, we´re not releasing it." 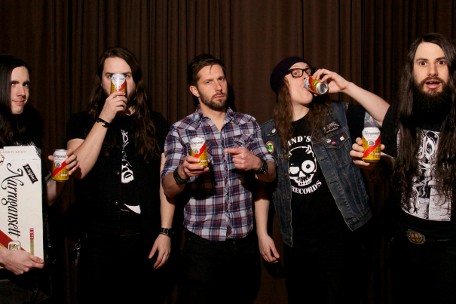 Rhode Island's riff-obsessed reprobates have shorn up love of the sludge and become a metal machine that has more in common with Lamb of God than most of Relapse label brethren. Recorded with "name" metal-dude Zeuss (Hatebreed, Suicide Silence), Bloodlines may be one of the unexpected metallic surprises of 2013.

"In a very short amount of time, Zeuss pushed us in the studio and really helped us to become the band that we've always be," says frontman Vincent Hausman of Howl's grueling ten days in the studio. "There's been a few member changes [most notably the departure of guitarist Andrea Black] but we're a better band for it. We wanted to make a motherfucker of a record: something hard, aggressive and relentless. With Bloodlines we did just that." 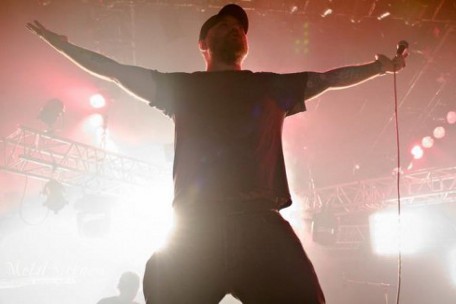 Like kindred spirits Neurosis, Integrity isn't a simple proposition. Founder and frontman Dwid Hellion has taken a bludgeoning hardcore framework and raised a rabid doomsday cult around it. Suicide Black Snake maintains the band's long-running pitch-black sound and hits the mark like a like a slap in the face of a complacent scene. Add in a moment or two of back-porch blues and even a harmonica to the proceedings and you've got a chilling artifact from hardcore's blackest and most controversial souls.

"Integrity has always walked its own path," states Dwid. "We believe that it is always more important to make the music that we would like to hear. With the messages and imagery that we would like to experience and express, rather than what is expected or popular at any given moment. With Suicide Black Snake, we set out to continue in our own selfish manner to make another album that we want to listen to. If anyone else enjoys it, that's great. But, ultimately we make these records for ourselves."

One, One, One., Shining (June 4 on Prosthetic Records) 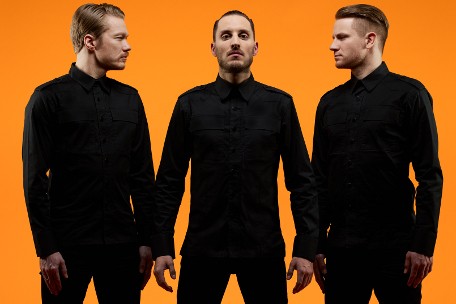 Shining guitarist, singer and saxophone-slinger Jurgen Munkeby may, in fact, be more seriously twisted than any of his tabernacle-torching countrymen. The Norwegian outfit - not to be confused with the Swedish nihilism squad. The Shining -, has at last concocted a crafty balance between metal, black metal, John Zorn-like jazz improv and sheer sonic chaos. - and made it swing with a vengeance! No surprise, really, that they were once an acoustic jazz band.

"Even though this album is more immediate than our previous albums, and with less focus on nerdy details," says Munkeby. "It's hard to eliminate the sometimes obsessive focus on small details. That's for instance why the title "One One One" reflects four different things: First it's supposed to symbolize that the songs are meant as a series of singles, a series of 'ones' if you will, with no filler tracks. Secondly as it's meant as 'Blackjazz 3' as in a Blackjazz trilogy. It's also the number 7 written i binary number, which reflects that this album is our seventh release. Finally I hear that "OneOneOne" is a new Internet thing people use after a lot of exclamation marks." 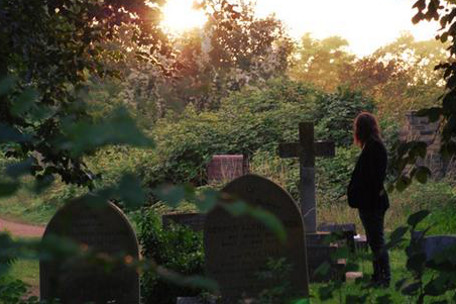 Much like their former Rise Above stablemates, Ghost B.C., these Hammer Horror worshipping, psych n' '70s obsessed doomsters have kept their identities purposely oblique and let their ten-stone groove speak (loudly) for itself. Only in March of this year have they emerged from their timeless haze to even play a live show! Uncle Acid & The Deadbeats' second slab, Mind Control speaks for itself. Think a Desert Sessions record recorded deep in the British Midlands.

"It's an album about a murdering psycho who starts a death cult in the desert," says the good Uncle Acid himself. "It's complete madness on a par with the worst gutter trash exploitation film you've never seen. It will be available to buy under the counter at all good Tape stores."

Not surprisingly, their Facebook page lists Charles Manson as their General Manager.