If the Bad Brains' notorious image of a lightning bolt striking the White House was ever truly relevant it was last night. Not only did Brains frontman HR and a rotating casts of musicians chant down Babylon to aid victims Hurricane Sandy at Manhattan's Bowery Electric club but they also did it in the midst of America's evening of electoral pageantry. "It was smashing, smashing," said HR of the show the next morning. "Melvin Gibbs, Vernon Reid from Living Colour also Mackie from Cro-Mags and one other brother named Todd [Youth] did our tribute to the Brains and it was very nice."

Now, HR is a complicated man. At 56, he's still as compelling as he was back in the days of onstage backflips and generation-charging classics like "I" or "At the Movies." He's soft-spoken and resoundingly positive (See: PMA: Positive Mental Attitude) about nearly everything. Oddly, his voice often (and inexplicably) turns into an English drawl.

Warning: don't try and pierce the enigma that is HR. He's as original and eccentric as any musical legend gets.

The Bad Brains are releasing a new album, Into the Future, later this month. Wrapped in a Shepard Fairey sleeve featuring the Lion of Judah surfing the rings of Saturn, it's the rawest Brains recording since recording their landmark ROIR cassette in 1982. "All people of all nationalities will be able to blend in and find it most attractive," HR tells Noisecreep in his characteristic patois. "It is finally a musically approving sound that does good with the kids but also with all people." It's also the band's first self-produced record in years, recorded in Woodstock, N.Y., home to bassist Darryl Jenifer and guitarist Gary "Dr. Know" Miller.

"It was orchestrated properly, arranged very well and overall it is a provable A-plus production," says HR happily. "The way it was recorded really allowed the group to pull it together. Darryl really belts out some nice bass playing and Gary as always is unbelievable. Earl, [Hudson – Brains drummer and HR's younger brother] is just magnificent. And of course the vocals, well what can I say? God was with me."

So was the recently departed Adam Yauch (aka MCA) of the Beastie Boys – at least in spirit, an old friend of the Brains, Yauch was the producer and driving force behind their 2007 album Build a Nation. Yauch is eulogized on the new album with a remix of the track "Peace Be Unto Thee." You can't help but wonder what the former Beastie would think of Into the Future. "I think he'd say we're living up to the tradition of doing Jah's work," HR says. "He'd be quick to catch on to the different techniques and happy we stayed on top of things."

Listen to 'Into the Future

While it certainly isn't an album of ragers like 1983's Rock for Light or 1989's Quickness, Into the Future still destroys Babylon with plenty of requisite fire. Try the 88-second total-mash "Yes, I" or "Suck Cess," an old-school hardcore blast that according to HR was an unfinished track from the band's earliest days. Of course, what would a Bad Brains record be without detouring into dub and reggae? Try "Jah Love." Yea Mon, there's plenty of Natty Dread amidst the thunder thrash. Then again, the Bad Brains have never stuck to formula – see the Nile Rodgers-esque "Secret 77" from Rock for Light or the soul-reggae hybrid "Stay Close to Me," the flipside to their very first single, 1980's "Pay to Cum."

Says HR on the Bad Brains' musical DNA: "I give that respect and credentials to being a listener and appreciator of good sounding music by Stanley Clarke and also brothers like David Bowie along with the Clash, James Brown, and the ever so popular Stevie Wonder. Not to mention the tradition of innovative and finely recorded sounds and hardcore music." As far as any current music that may have inspired him, HR inexplicably mentions Janet Jackson, Usher and the "high-powered sounds" of Ziggy Marley.

Like I said, don't ask. Just go with it.

Asked if he can recall the best shows he's ever played, HR is surprisingly lucid and quick to answer. "I think one of the best was at Rock Hotel in '80s. Another favorite show we did at a festival in California about two years ago. And the Christmas show we did in 1981 at CBGBs in New York. At that show, the group was really, really at their peak. The songs we put out were really blazin'. I mean they shredded like never before. I'll always hold those shows dear to my heart and I am look forward to playing more and continuing that tradition. The best is yet to come."

In his lyrics and interviews the word "education" frequently comes up. HR himself cops to learning a great deal from Bad Brains fans and younger musicians. For example, at a recent Deftones show, when he joined the band for their rendition of the Brains classic "Right Brigade" and their own hit, "Bored," the results were electrifying.

"What I've learned is each one teach one and also what I've learned is those youths are intellectual and they hold on and they can relate to it," says HR. "I didn't know if people were really listening to the words but man when they were playing those tunes those dudes can remember every little thing!"

Anyone familiar with history of the Bad Brains knows that their legacy is one of triumph riddled with troubles, inter-personal rifts and the frustration of the band in dealing with their more than eccentric vocalist. At the very start of the recent Bad Brains documentary film, Bad Brains: A Band in D.C., bassist Jenifer tells a smirking HR: "I see you coming to sabotage shit. You're a sell-out and I hope I never have to see your ass again." While the Brains have secured their spot in history but you can't help but wonder just how they would have resonated had they not been blindsided by their frontman's erratic behavior.

For example, the Bad Brains eschewed no less than two major label deals in the '80s from both Island and Elektra Records. Legend is, that while the band was in Elektra's offices, HR inexplicably went missing. His rationale: wanting to play just reggae. In the case of Island, U2 themselves wanted to sign the band to the very home of Bob Marley. Once again, HR bailed. Even the deal the Bad Brains did eventually do with Madonna's Maverick label, that yielded the 1995 album God Of Love soured. At a show in Lawrence, Kansas, HR gave the el-kabong to a skinhead in the crowd and was thrown in jail. Bad blood with the "Babylon-system" ensued with the with Maddy temporarily holding onto the band's name, forcing them to work under the monicker, Soul Brains. Clearly, the Bad Brains have been to the mountain but never gotten over it. Does HR have any regrets?

"No Sir, I do not have any regrets but I do think that the relationship between musicians and the labels is important. Because there was a certain creativity control that existed with the label owners, our relationships were controversial. Because of that, we were a little bit hesitant and likely inexperienced. Nowadays we're a lot more experienced so were not declining those offers. We're thankful for those people's patience and cooperation."

Were there any opportunities that the Bad Brains should have taken in their long and troubled history? HR's answer is surprisingly lucid.

"It's hard to say no one can say for certain," he says. "Sometimes those boys are on the level and sometimes they are looking for a bunch of people to make a fast a buck off of and then they bury you in the sand. As you know, the Brains, we're not that kind of people. We understand that that it is a financial improvement and it does help predominantly to put out good music and the money managed properly but as you know, ownership of our music and ownership of the band members is important as well. As you know, it's hard to say. No one really knows."

After a half hour of talking to HR, you come to realize that he isn't merely an unhinged loon who has become both hero and villain to the underground. Quite simply, the anger of the Bad Brains' early days has been supplanted by a serenity and calm that comes with time (not to mention a lot of weed). After all the Bad Brains, not merely sounded the horn that ignited hardcore but then they found Jah within its buzzsaw of sound.

You can't help but ask: after 33 years of chanting down Babylon, what does punk mean for its most erratic icon?

"What it means to me is a connection with the past, the present and also the future in music and politics," explains HR. "But, it's time for a change. The Brains have the ability and the skill to make that change a reality. Before that, it was just a dream. Now that dream is a reality."

Boldly we go: With the Bad Brains. 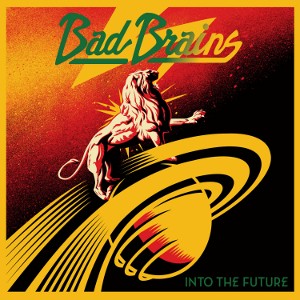 Into the Future will hit stores on Nov. 20 via Megaforce Records and can be pre-ordered at this link.