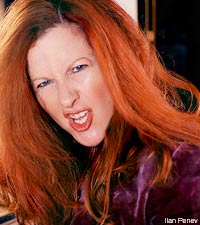 Melissa Cross is known in the metal industry for her work with Lamb of God, Shadows Fall and hordes of others. She isn't a metalhead by nature, but she has come to understand, embrace and love the scene. She recalled seeing Bad Brains, Megadeth and Slayer years ago at the Ritz, and it affected her "I saw that moshpit and was like, 'Oh my god!' I was in a punk band, as the singer, and I worked in the music business, during the day, but nothing affected me like seeing that!"

We can surely relate to that feeling! Cross is an esteemed vocal coach who works with scores of talent, including the Bravery, Shinedown and ... Kevin Bacon. So now, even Lamb of God has six degrees of separation from the Bacon-ator! "His son was in a black metal band and got a hold of my DVD. Kevin heard his son doing warm-ups, so Kevin was a student for a short time," Cross revealed.

But Cross isn't simply teaching metal vocalists how to perfect their growl and protect their vocal folds. She is bringing the genre to the attention of voice specialists across the country. "I have taken vocal distortion up to the Voice Foundation, which is an annual symposium of voice teachers and doctors. It's a big pow-wow," Cross said. "It's prestigious and I have taken this technique and shown these classical people that this is what is going on! Wake up! This is valid music and people need to understand this. All your clients are not opera. They do this, too and they need your help." Cross says that the technique of vocal distortion is not unique to the metal genre, citing James Brown and Little Richard as examples of voice distorters!

"Most people who teach voice are not listening to pop music," Cross said about her efforts to bring metal to their attention. "They are trained as classical. We put a camera down Randy Blythe's throat while he was performing 'Now You've Got Something to Die For' to show them. It was a great experience with me, Randy and Tommy Vext." Blythe and Tommy Vext were dosed with novocaine and a camera was inserted through their noses and down their throats! Cross said, "It was just a nasty taste and slight discomfort of something foreign, but they were game for it." The camera looks at vocal folds -- Cross stressed that "they're not called 'chords' anymore" --- when this distortion is happening. "When this was presented, to all these conservative people, they were freaking out," she said.