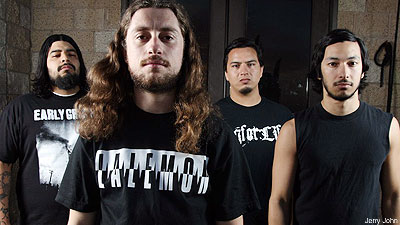 "We're super stoked on the finished product," said singer and guitarist Carlos Garcia. "Paul was amazing to work with. He was very encouraging and super patient with us, and we're eternally grateful for that. And of course, he knows his way around the console. This is honestly the first album we've done that is an accurate representation of Antagonist's live sound, and it definitely showcases a more refined, aggressive sound."

While Antagonist's 2008 album 'Exist' was lyrically optimistic, the subject matter of 'World in Decline' is as bleak as its title suggests. "The album is about the realization that things will always be f---ed up, people will always be selfish, and this world is going to end at any minute, and we have nobody to blame but ourselves," Garcia said. "People grow older and figure out that life doesn't get any easier and that our own selfishness, carelessness and ignorance are at the core of our demise. So right now, that's where our heads are at, which will in turn no doubt lead to a much more aggressive and angry album."