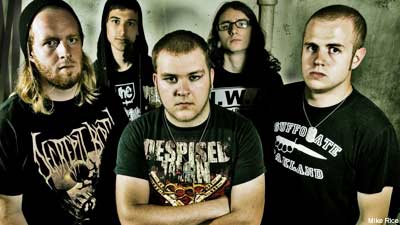 Detroit's young death metal outfit And Hell Followed With are sticking it out on the troubled Be Shred or Be Dead Tour. Supposed to feature Sea of Treachery, Suffokate, Blind Witness and Destruction of a Rose alongside Earache Records' latest newcomers, the Malus Clothing-sponsored run has hit some major snags.

Underway since mid-October, the tour has lost two of the main bands on the bill: Suffokate and Sea of Treachery. Commenting on the situation, And Hell Followed With's guitarist Kyle McIlmurray explains, "One band left because they were offered another tour that they couldn't refuse, and we all understood that. We wish them well. The other guys though? Well let's just say that we have no remorse for these bands who come out and whine while they're riding in a new van with a new trailer and make $300 a night. Right now we're a few thousand miles away from home, trying to make it on $100 a night or less."

But despite the significant setbacks, the tour has still been "kicking ass" according to an optimistic McIlmurray, who also adds, "It's all about getting over the bumps. There's always going to be bad shit. The tour took an unfortunate turn and we're toughing it out trying to hold everything together. It might suck a little bit, but we're going to keep this going and make the best of it. At the end of the day, it's all about digging through the bullshit to find the one good thing you need to keep the faith."

And Hell Followed With inked a deal with Earache Records this past summer and are expecting to enter the studio to record their forthcoming debut this December. The Be Shred or Be Dead Tour finishes in Springfield, Ill. Nov. 29 with And Hell Followed, Blind Witness and Destruction of a Rose carrying on.