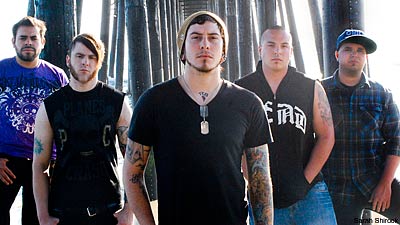 Destruction of a Rose, Wrath and Rapture and Create Avoid will join forces and take part in the Brewtal Invasion Tour. Brewtal, huh? Sounds like everyone likes to indulge in libations. So we had to find out what are the favored drinks of these red plastic Solo cup-raising metallions.

"Well we want make this tour fun and with a name like 'Brew-tal,' we kinda have no choice but to make it a drinking tour. I know all of us like to drink, some more than others though ... E.J.," DOAR guitarist/vocalist Nick Barker told Noisecreep, outing his comrade. "We all have our own favorite drinks, but on the road it's mostly s---ty beer or whatever we can get our hands on."

Best drinking-related DOAR tour story? This one is a classic that should go down in the annals of post-show hedonism! Barker said, "We meet a lot of people who want party after shows. One time we went to a house party. We wanted to shower because we were smelly, so we were taking turns showering. Without naming any names, one of our boys was molested in the shower by a lady in her late '30s, and let's just say she wasn't much to look at."

Barker also wants the band to make this tour memorable and warns, "Look out America -- here we come!!"

Create Avoid bassist Jake Round admits that his band is "firmly planted in hardcore." He told Noisecreep that the band doesn't take itself too seriously. "We all love to have a good time and often travel with an ice chest full of 'The Diesel' aka Budweiser," Round revealed to Noisecreep. "Nothing against the kids with X's on their hands, but we just like to get loose. Call us old fashioned, but we like whiskey and beer. If it ain't broke, don't ..." Amen.

Wrath and Rapture are able to tour by being frugal, so Kenan Livermont echoed his tourmates sentiments, telling Noisecreep, "We like to have a good time, but since were on a budget, there's a lot of PBR that goes down. Since we're on the way to Texas, I foresee a vast quantity of Lone Star beer being consumed!"

Best WAR tour story? "Every day is a crazy party, but in Connecticut, we partied at this warehouse that belonged to some girl's dad," Livermont said, "We found a ton of pallets and our Eagle Scout friend managed to light them on fire. We got a 12-foot blaze going on. Then this girl decided she wanted to jump through it with Scott. Scott made it through but she fell in the fire and her thong caught ablaze. She rolled out the fire and was fine, other than some gnarly blisters on her ass. We also got the whole thing on film, so look for that soon. We decided to bring a laptop on this tour so we can edit footage on the fly and get it on YouTube as these stupid things happen!"