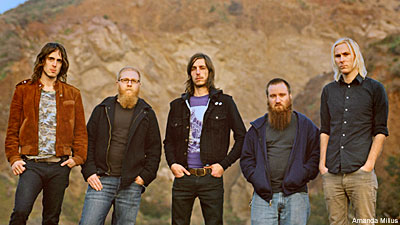 ON THE RISE: Los Angeles' Ancestors debut album 'Neptune With Fire' (North Atlantic Sound) has been getting rave reviews from critics and fans alike, and features some thick Sleep meets Pink Floyd fuzzed out riffage. They will be bringing their psychedelic doom to SXSW for three shows over two days. When Noisecreep asked if he was more excited to play SXSW or to go and soak up the fun, guitarist/vocalist Justin Maranga said, "SXSW seems to be equal parts business and party (maybe a bit more party), so I'm sure there will be plenty of debauchery as we're sharing a house with three other bands. We're just excited about the whole thing, but I don't think that any amount of partying can outdo playing a good show and that's our main goal in going down to Austin."

They are also planning on entering the studio in April to record their sophomore record, which will be "more on the progressive side than the songs on 'Neptune' were."

CALLING IT QUITS: Boston's doom/sludge stalwarts Grief have decided to call it quits (again). They formed in 1991 and disbanded in 2001 citing drummer problems and a "hostile environment for doom metal bands". The reunited in 2005 for limited touring and again toured the US and Europe in 2008. They will not be appearing at the Maryland Deathfest as previously scheduled.

COMING SOON: Time to put on your grimm robe, drone kings Sunn O))) have announced details of their forthcoming release "Monoliths & Dimensions". The core duo of Stephen O'Malley and Greg Anderson will be joined by several guest musicians, including Oren Ambarchi, Attila Csihar, and Dylan Carlson as well as a brass section, an upright bass trio, French & English horns, harp & flute duo, piano, reed & strings ensembles, and a Viennese woman's choir led by Persian vocal savant Jessika Kenney. The official release states that the album is not "SUNN O))) with strings" or "metal meats orchestra, but is more of allusion toward the timbre of feedback and the instruments involved" and is "the most musical piece we've done, and also the heaviest, powerful and most abstract set of chords we've laid to tape." Release dates are May 18th for Europe and May 26th in North America.