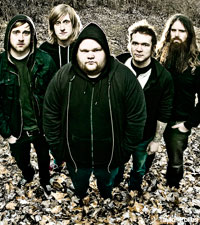 Killer Lyrics: I'm so sick of this / Sick of whats going on / Now i'm putting an end to my silence / Your god's not real

Noisecreep talked to Nasvhille's A Plea for Purging and their killer lyrics last year when their previous album, 'Depravity,' came out. Now we take a look at their newest batch of metalcore anthems, 'The Marriage of Heaven in Hell,' a curiously-titled album holding a song just a curiously named.

"'The Eternal Female' is my eye-opening realization of the world around me," vocalist Andy Atkins told Noisecreep. "I've started to find it hard for myself to trust anyone, no matter how pure their motives seem. This distrust comes from continually seeing pure motives turn perverted. Man has a wicked nature that will never leave us till this world is dead and gone. We, as men hunting to always be on top, have even found a way to profit off the one pure thing about us, God."

It's no secret that Plea, as they are sometimes called, are Christians, as are all of the bands on Facedown Records. Atkins, however, doesn't claim to be especially exempt from the criticism he hurls at Christianity in general -- and he doesn't claim to know all. "Now I guess I should mention the obvious, this is my/our opinions," Atkins explained further. "Just because I have a gold plated mic grill, I haven't dubbed myself 'King of all Answers.' I have started calling things like I see them. I feel uneasy about the state of modern American Christianity, and I am being honest about it. I have found that being honest in our music means a lot more to me than being agreed with."

Atkins provided even further explanation to the song's lyrics: "As for 'The Eternal Female,'" he said. "My God provides for his followers. Those that stand to pervert his name or gospel for greed will have to provide for themselves as they will receive judgment. The god that men of greed speak about is not my God, and I will no longer sit back and let his name be dragged through the dirt. We, as evil men, have done this to ourselves and its our time to get right. I may not be a literal reaper, but I am angry and will speak against the things I see wrong in this world."

Catch A Plea for Purging on the Scream the Prayer tour from July into August to support 'The Marriage of Heaven in Hell.'

Download A Plea For Purging Songs
Filed Under: A plea for purging, APleaForPurging
Categories: News
Comments
Leave A Comment
Back To Top