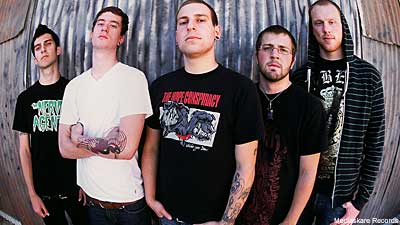 Former A Dying Dream vocalist Jonathan Vigil and guitarist Aaron Brooks are still making a racket together in the Ghost Inside, which signed to Mediaskare, the same label that was home to A Dying Dream. And Brooks actually played drums in his previous outlet! The Ghost Inside are pretty much a continuation of what the bandmates were doing in A Dying Dream.

Brooks told Noisecreep, from the Brick Hit House studio in Cape Cod, Mass., where the band is recording, "We spent a few years touring with before we decided to change things up. Different people were writing the new material, which of course gave us a new sound. It was only natural to leave the old stuff in the past. We started working on the songs that would become 'Fury and the Fallen Ones.'

"We wanted to be more aggressive and add a lot more melody with the new band. But more than anything we just wanted to write music that we would want to hear. The biggest factor in our writing is whether or not we are stoked on a part. If we are into a riff, we keep it regardless of what it sounds like."

Brooks, who taught himself how to juggle when he was grounded for three months at the age of 13 after doing "something ridiculous" that he doesn't quite remember the details of and thusly taught himself to "throw things in the air and make it look badass," insists that The Ghost Inside are a Cali band through and through, and that they love Cali-patented activities like surfing and snowboarding. "Take pretty much any cliche' California activity and we probably love it. Get over it, we're an LA band," Brooks said.

The Ghost Inside's debut will be out early 2010, followed by plenty of non-stop touring.

Filed Under: A Dying Dream, ADyingDream, Ghost Inside, GhostInside
Categories: Interviews
Comments
Leave A Comment
Back To Top