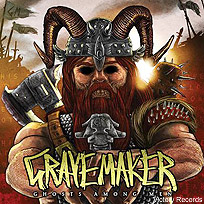 Vancouver's Grave Maker are one of the newest bands on Victory Records, the label that put hardcore on the more mainstream map with its roster. While hardcore isn't anywhere near as popular as it was in the mid-to-late '80s and mid '90s, Grave Maker hope to amend that reality with their label debut, 'Ghosts Among Men,' which is due out June 22.

"We're a hardcore band out of western Canada. We live to tour, tour to live. Hardcore is in decline, we are one of the bands trying to keep it alive," drummer Wayne told Noisecreep. "We are an aggressive, fast and heavy-hitting hardcore punk band. We sound like a wolverine fighting a garbage disposal full of steak knives." Sounds like what we like to ruin our hearing with.

The band will spend the month of release touring with Stick to Your Guns and the Ghost Inside in the U.S. and their native Canada, and they'll hit the touring circuit with Terror, Foundation and Naysayer in July as well before taking off for Europe with with 50 Lions.

"It just never ends," Wayne said with a laugh. "We tour so much, it's taken over all our other activities. So I guess we are all good at peeing in bottles in moving vans, sleeping on floors, finding the cheapest meal deals, sneaking into pools ... that kinda stuff!"