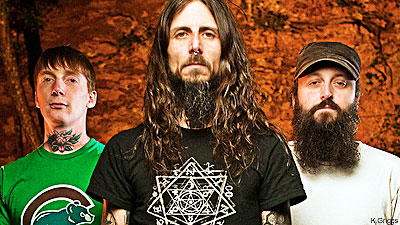 Zoroaster's 'Matador' might be one of the most anticipated records this year -- and it deserves to be. The sludge-bending trio is not holding back on their third full-length, for what seems to be not some new direction but a refinement of the various paths and experimentations the band has has over the years.

Listen to 'Ancient Ones'

On first listen, 'Ancient Ones' feels far removed from the spacious droning of last year's 'Voice of Saturn.' If you feel the song harkens back to an older form of the band, it should. 'Ancient Ones' was actually written in 2003 when the band first started. "After changing drummers, it just happened to be one of the songs that we never showed [Dan Scanlan] and we just kind of forgot about it for a couple of years," guitarist Will Fiore explained. "But when we started thinking about doing a new record, we ended up remembering these great songs that we had in our back pocket." The title track and 'Trident' carry the same timeline.

'Ancient Ones' almost has a chant to it, as bassist/vocalist Brent Anderson hisses into the chorus making the knowledge of these old ones seem quite important. "We tend to write metaphorically," says Fiore. "Everything is usually pretty personal; everyday s--- that everyone has to go through or think about, but maybe wants to 'mask' for whatever reason. Whether it's to protect someone's feelings (who might realize you're talking about them) or maybe just to protect ourselves from some things we may have been through or think about.

"As far as this song and with most of the songs we write, it's about many different things from verse to verse or even within the same lines so it's hard to come up with a clear answer as to who the 'Ancient Ones' really are ... you decide."