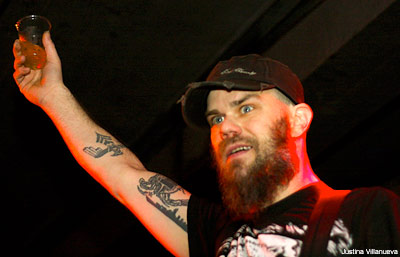 Webster Hall's the Studio in New York City isn't much like the upstairs part of the classic venue. It's your typical basement music spot and not a historical dance hall. Yet this writer has seen some magical performances at the Studio, including a whacked out Zoroaster. Last July, bassist Brent Anderson smoked a cigarette while playing bass. He did this with both hands on his bass, zero hands on his cigarette. The winter before that I saw Dillinger Escape Plan frontman Greg Puciato and his partner in crime, guitarist Ben Weinman hang from the lighting grid above the crowd. I don't know how the 124-year-old venue didn't fall apart that night.

On April 10, Weedeater played the swampiest of sounds at the Studio. Their set was as aggressive as the above mentioned shows. For the Nine Toes Tour, the Southerners brought along Struck by Lightning, Gates of Slumber and Black Tusk. The show was hosted by BrooklynVegan's Black Bubblegum. In a city filled with too many things to do on a Saturday night, every band was worth watching.

"We're here from North Carolina and we suck!" frontman and former Buzzov•en member Dave 'Dixie' Collins said to the New York City crowd. The sludgy trio came out to the stage raising their drinks, like the madmen that they are. Collins also had a bottle of "syrup" with a straw sticking out of it. It was gaff-taped to the wall next to where he and his bass were positioned. And I'm pretty sure it was the provider for much of the great, indecipherable banter of the night -- like when he said one song was about a sandwich. 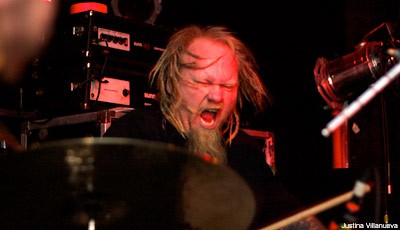 Everyone at the venue was amped from the second the band was on stage to the end of their set, when Collins said, "Let's get f---ed up!" There were mosh pits, a kitty and a guy playing 'Tetris.' The show was fourth to last on their month-long tour. Afterward, the band enters Electrical Audio Studios to record their fourth album.