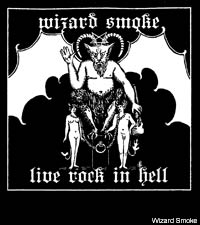 What exactly is Wizard Smoke? Many people know it as the legal bud that gets smoked up in movies to give off that authentic looking cloud release without having to commit a crime on a set, but now Wizard Smoke is also the name of a band from Atlanta, Ga that, in a very short of amount of time and with only a few local shows under their belt, is grabbing up attention and Internet talk from all over the globe simply because they are giving their debut album away for free.

"If you're a new band and really want people to listen to your music, you have to prime the pump somehow," guitarist Dan Nadolny told Noisecreep on the band's decision to give up their first recording. "Digital formats are the best way to get your music into the most hands possible, but you've got to give that stuff away for free. Especially the CDs, because CDs are for chumps," he expressed. "Nowadays they are just a method for delivering music to your computer to be ripped as MP3s. After that's done, they are completely worthless pieces of trash, so no one wants to pay for them. People won't pay for MP3s either if they can help it. But if you give them something for nothing, they will be that much more stoked on it and they might even come to your show."

Within minutes of the band putting 'Live Rock in Hell' online, glowing reviews began posting all over the Internet; the first being from a German metal blog. Nadolny attributes the attention to their early Electric Wizard-style fuzzed out sound, comparing the response to the result of grocery store marketing. "It's like the free cheese kiosk at Whole Foods,' he analogizes, "You say, 'Hey, this is good,' and find yourself talking up Beachwood-aged Havarti to your friends, largely because it didn't cost jack."

To many familiar with the list of bands the members of Wizard Smoke are in/have been in the heavy stoner sound is a big departure from the more soft and hooky music they all play. But when everyone jammed together it made sense. "It felt good, damn good," Nadolny says over the session that birthed the band. "[James Halcrow] was a mutual friend of everyone and a veritable professor emeritus of doom, so it made sense to get him involved. [Ben Arnold] was said to have broken a brass gong clean in half after one hit. So that was appealing. He was in. We've all spent time in less 'metal' acts, but we're definitely fans of really thick, dense, tormented-sounding sh- as well. Earplugs can be fun."

When the band started a goal was set to only play off and on at set times in the year. "A couple of us were in past bands that we felt played a little too often. When your band is playing shows ever other week, it's really hard to get your friends to come out regularly," explained Nadolny. "Plus, it's always nice to have something new to offer at each show, whether it's a couple of new songs or a cover or some stupid stage antics."

But the buzz the band has behind them has them maybe willing to play more than they originally planned, but still the simple reason they all got together still remains no matter how many shows they get offered to play. "Overall, though, we didn't really have many expectations to begin with. Being in the band is basically an excuse for us to all hang out with each other, drink beer and shoot the s- anyway," says Nadolny. When we started writing music and it was actually pretty good, it was a bonus for us. The fact that other people seem to like it makes us just want to drink more beer and hang out more often."