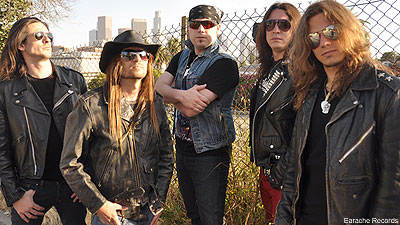 Los Angeles heavy metal throwbacks White Wizzard have parted ways with singer Wyatt Anderson and guitarist Erik Kluiber, who split with the band after their U.K. tour with Edguy. The desire to pursue different paths was the reason given for Anderson's and Kluiber's exits. The band wasted not one second regrouping, though. They debuted singer Michael Gremio, formerly of Cellador, and guitarist Lewis Stephens, who hails from Wales, at the biggest show of their career: this weekend's Download Festival in England. It was the band's first-ever appearance at the long-running fest.

They released a statement, where bassist, principal songwriter but founding member Jon Leon told Noisecreep first that "We are very excited about introducing two new members of White Wizzard. [Michael Gremio] has torn it up on stages worldwide and he brings a much needed boost of high energy and passion to the band. His soulful and powerful voice will bring a new level of power to our live performances."

Introducing new shredder Lewis Stephens, Leon called him "an amazing young talent that is a Rock God in the making. He brings a feel that White Wizzard has needed that has helped bring the music to its highest level and he has solidified the chemistry in the group both musically and personally."

While White Wizzard are certainly thrilled with their new additions, it was an arduous journey to get where they are. Leon said, "We have been through a lot trying to find the right guys for this long musical journey we are planning and we feel we have finally got the right guys in place."

There didn't seem to be any acrimony about the split, with Leon saying, "We wish the ex members all the best, and we are more exited and driven than we have ever been to bring this band to the highest level possible. These two new members were the missing pieces we needed to move forward and progress the band to its desired goals."