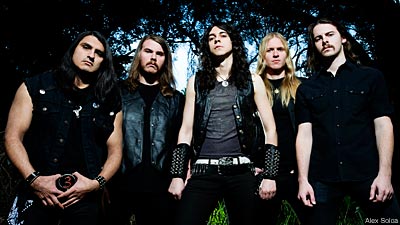 Los Angeles metallers Holy Grail -- their sound is a nod to classic metal acts like Judas Priest and Iron Maiden, but don't call 'em throwbacks -- will hit the road to tour with Viking metal Amon Amarth this April. Before laying waste to venues, Holy Grail will finish recording their Prosthetic debut, 'Crisis in Utopia.'

"This new album has been quite an undertaking and it's the first time [guitarist] Eli [Santana], [James] LaRue [guitar] and myself have each brought our own material to the table and fully collaborated, so there's a plethora of riffs and songs to choose from," frontman James Paul Luna told Noisecreep. "Not only is there an over-supply of material, but adding Renholder [Danny Lohner] to the mix, as producer, there's an even larger pot of ideas to meld into the metal stew. However, none of this is a bad thing. It's all really necessary to make the best record we can possibly make within our means. We're super excited to see this flesh out into a solid offering of metal with brutally catchy hooks and shredding leads. We hope the rest of our metal community -- and perhaps the world -- will enjoy it as much as we do!"

Formerly known as Sorcerer and featuring ex-members of the similarly minded White Wizzard, Holy Grail are proud of their influences. While there is a new wave of bands that are latching onto a classic style of metal, Holy Grail are adamant that they are not staging a revival. "I'm stoked that people think of us as a great band, or a forerunner in a new movement, but we're not trying to be revivalists or trendsetters," Luna said. "Priest, Maiden and Sabbath all invented heavy metal before there were any genres or sub-genres."

While Holy Grail aren't mired in delineations, they are happy to live the metal lifestyle. Luna said, "Since there are so many bands and sub-genres, there won't ever be another Priest or Maiden because the urge to categorize bands into these subsets of music won't allow it. I'm not saying we're like Priest, Maiden or Sabbath, or that we're on the same level as them. I'm saying is metal is like a belief system and every metalhead has their own 'metal will' and 'metal philosophy' in which they can decide as they please as to who they think the 'metal gods' are and what bands fit into which sub-genres of metal. To us, this band is heavy metal, plain and simple. We don't want to re-create classic metal or thrash or NWOBHM or limit ourselves to just that, because we like newer metal as well."

With that in mind, the band writes without parameters. "We try to free ourselves of these chains and write great songs with great melodies, heavy riffs and blazing solos," Luna revealed. "It just so happens that the last time anyone remembers catchy songs being mixed with heavy metal was in the late '80s, so naturally those people would think we're trying to re-create a thing of the past. We're just doing what every great band ever did: listen to various influences, study them, and create something new and fresh which exudes all of these influences. I think Eli put it best in an interview, stating 'We're not trying to re-invent the wheel here. We're here to run you over with it."

So get on board or get run over when 'Crisis in Utopia' hits shelves.