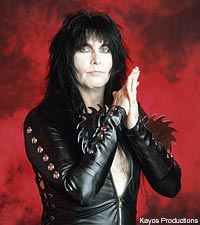 For W.A.S.P. lead singer Blackie Lawless, what started out as research into his 14th studio album 'Babylon' turned into a study of the Bible and microchipping in the European Union.

"I'll tell you basically where it started," Lawless told Noisecreep via telephone from Italy, where he was on tour. "It was about a year ago when all this global financial crisis -- supposed crisis -- was going on. In the news, everybody was talking about this global meltdown. I heard different politicians in different places -- especially over here in the E.U. -- these guys are saying, 'Maybe it's time that we should start thinking about a one-world government.' Then I heard another guy say, 'Well, speaking of a one-world government, maybe we should have a one-world currency.'"

It wasn't just those political anecdotes that made Lawless think, either. "What really got me was there was a guy who spoke up in Brussels and said by 2017 they're going to have all the E.U. microchipped," he added. "When he said that, I stood there with my mouth hanging open. When I heard that -- this is potential 666 that kind of thing -- I went online and I started doing a detailed research of microchipping.

"It's actually more widespread than even I thought it was. At home, there's a school--I can't remember if it's a high school--they already had some of the students microchipped there for school lunches and stuff like that. It's an experimental thing. All the kids do for lunch is they wave their hand in front of the thing that reads the computer bar. It's all done and they go eat."

Lawless said a doctor in Finland even told him that the newest generation of Europeans will be the first to be microchipped.

"There's a doctor over here that I saw in Finland," he said. "He's the biggest [general practitioner] nutrition specialist. He said he believed this will be the first generation of babies to be microchipped in the E.U. I'm listening to all this, [thinking], 'These guys understand what they're saying? This is direct, direct prophecy coming out of the Bible.' When I heard all this coming out a year ago, the first thing you think when you hear a politician use the word 'crisis,' is it's usually code for trying to figure out some way to take some more freedom away from you, or certainly to tax you one way or another."

From there, Lawless' study continued into the Bible's book of Revelation and the book of Daniel. He compared what he had heard to what he was reading.

"It was astonishingly accurate in the description of what these guys were talking about," Lawless said. "These guys are talking 2017. That's eight years from now. That's not a long time from now. Twenty years ago, I wrote a record called 'Headless Children' and there's a line in there, it says, 'Four horsemen sit high up in this saddle in waiting and ride the ride the bloody trail of no return.' I heard these guys talking, are we closer to that potential Armageddon scenario than we are then?

"What I am trying to do is with any kind of art, you're trying to make people think. All art is designed to provoke thought--whether it's movies, or music, or sculpture or painting. It's all designed to get you to think, to also understand in a particular scenario like this: Elections have consequences. Don't just think your voice doesn't matter. I used to think it's me and my one voice doesn't matter. We do know that groups of people coming together really can make a huge difference, whether it is or it isn't.

"In democratic society, elections have consequences. Don't just look at some guy because he's speaking well, or you think he's going to be OK or something like that. Go dig into the guy's background. Look at what this guy is really standing for and try to make a decision from there. I understand we all get busy lives. But in democratic societies, you have a responsibility to really make your votes be heard and not just go along with the status quo."

Filed Under: wasp
Categories: Interviews
Comments
Leave A Comment
Back To Top