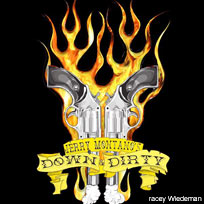 Former Hellyeah/Danzig/Nothingface bassist Jerry Montano may have been out of the metal public's eye as of late after leaving Hellyeah on the eve of their self-titled debut album in 2007 -- in a manner which many stories and rumors have been circulated. Rather than get into all that gossip and hearsay, Montano has resurfaced in the music world and has been working on a ton of new material, which is quite different from his past output.

"It's about growing up and progress," Montano told Noisecreep. "I'm never going to be an angel, but I am more aware. It basically got to a point where I had a choice: die or take my head out of the bottle and face the wreckage of my past and dust off. I took a few years away from music, went to college and majored in biology and nursing, if you can believe it, and realized that though I loved school, it just wasn't me."

After realizing that his love for music that was what carried him through his darkest hours, Montano picked up his Gibson guitar and let the songs pour out of him. "It's not easy to be hated by the world," he mused. As for the music, "It's about honesty, love and respect. Not ego, hate and destruction. So I'm just one day at a time. I have been extremely focused on my two projects.

"Down & Dirty is something I'm proud of. I sing and play guitar, and it's everything you'd expect and another side you wouldn't. Songs like 'Drink and F---,' 'These Bloodshot Eyes,' 'Legacy and Blood,' 'Rock 'n' Roll Outlaw' and 'Life of Mine' are a mixture of straight acoustic and hard rock with a southern twist. No, I'm not going to go throwing on a cowboy hat and chaps anytime soon! It's about rock, and it's still me." Down & Dirty are currently tracking in the studio and will also be working on a cover of Alice Cooper's 'Be My Lover.'

In addition to D&D, Montano is working on another band, which is a heavier, currently-unnamed rock band by his own admission. "It's my main focus," he said. "Featuring my good friend Mark Zavon on guitar, Mike Dupke from W.A.S.P. on drums, and Matt James from Program the Dead. We are just finishing vocals now and should have something up in a month or so." Montano said that he is all about writing songs and feeling good doing it. "I'm really enjoying writing and working with these guys," he said. "It's a miracle what can happen once you let go of ego, grudges and pride. I'm looking forward to a new beginning and a new start at an old game."