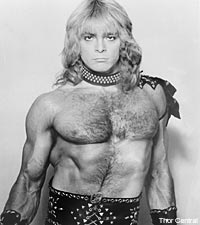 Before there was Manowar, there was Thor. The self-described "rock warrior" started creating a buzz in his native Canada in the bodybuilding world and then through his infectious blend of primitive heavy metal and punk rock. Although he hasn't become a household name, many metal cultists hold Thor's discography and infamous live shows close to their hearts.

It was recently announced that Thor would be part of the A389 Records 6th anniversary party weekend with an appearance on January 8th at Sonar Clubroom in Baltimore. Backing the Canadian metal kingpin will be no other than Deathwish Inc. recording artists Pulling Teeth. Noisecreep spoke with Thor and got a crash course in rock warrior 101.

Let's go back to the 1970s. The idea of Thor had obviously already existed but how did you conceptualize the 'legendary rock warrior' persona and did bands like Kiss and the Sensational Alex Harvey Band help inspire the move?

I actually started to conceptualize 'Thor: The Rock Warrior' in the 1960s as a young teenager. I was very much into giving the audience a stage show as glitter and theatrical rock was starting to happen in the late '60s. I previously played in various bands such as the Ticks and the Cougars playing bass. While the rest of the musicians stood around while they were playing, I would be jumping around whenever I performed. I was also a body building champion and won Mr. U.S.A., Mr. Canada and many other titles. This gave me the desire to be a frontman, and I did that with a band called Iron Gladiator and then Mikl Body Rock.

I was impressed with an artist from England named Arthur Brown who had a very flamboyant stage presence which led to my interest in Kiss and Alice Cooper in the '70s. I said to myself, "If Gene Simmons could breathe fire and Alice Cooper hanged himself on stage, then I would become a rock 'n' roll warrior that could perform superhuman feats of strength whilst singing a thunderous brand of metal music." Thus the name Thor.

Even back then, your stage show offered much more than just music. Can you talk about some of the crazier stuff you did on stage back then?

I wanted to have the wildest show ever. I wanted it to be even crazier than Kiss, [David] Bowie or Alice Cooper. If I was to be a real life rock superhero, then the feats of strength had to be real. I became the Evel Knievel of heavy metal. There was also trial and error in my experiments of showmanship. Yes I had outrageous costumes and masks, but there had to be more to the show, such as smashing through brick walls and iron rings that were on fire. There was one time that my cape caught on fire!

Another thing I did was lifting the heaviest person in the audience up with my neck. One time a 400-pound woman volunteered, and when I attempted to lift her with the harness around my neck, the platform broke and we tumbled into the crowd crushing the fans in the front row! Needless to say, I do not attempt this kind of stuff any more, but I've broken the Guinness Book of World Records many times in my career.

Did you ever play shows with punk bands back in the late '70s or did you find resistance from that side of scene?

There is a fine line between punk and metal. My 1978 album was considered a punk album and was on the punk charts alongside the Ramones. In 2001, I was invited by John Holstrom, promoter and head of Punk magazine, to perform at CBGB's along with the Dictators.

Around that period you scored a deal with RCA Records. Why did that relationship fizzle out?

I was always a business man and a free agent, so I only licensed them the master tapes, which I owned, for two years. When the time was up, I took the album back and recorded 'Unchained' in New York. I was offered a bigger contract elsewhere when my agreement was up with them. I made licensing deals with various labels around the world for 'Unchained,' which has since been re-released. It was a huge success. I had a lot of chart action in England with some number-one hits over bands like W.A.S.P., Van Halen and Twisted Sister. 'Unchained' was the catalyst that really changed my career, and I've never looked back.

You have a background in bodybuilding and obviously can kick ass. Did you ever have to lay the smack down on another musician?

I've won over 40 titles and was the first Canadian to win Mr. Canada and Mr. U.S.A. I competed against Lou Ferrigno (TV's the Hulk) for Mr. Universe. I have always respected the musicians in my band and try to pick the best to perform with such as Steve Price and Mike Favata. One time, I made a mistake and hired a player who had an addiction of which I didn't know about. He did something very bad. It was Christmas, and I met him in the hotel lobby where he tried to attack me totally unprovoked. I picked him up over my head and tossed him into the hotel's Christmas tree to the astonishment of the hotel manager and guests. There were Christmas balls bouncing all over the lobby area.