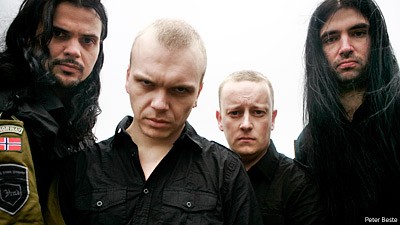 All Vreid albums speak about war in some kind of historical way; one even referenced a poems of a Norwegian freedom fighter. The band even began recording their newest album, 'Milorg,' on the Norwegian Day of Liberation, which bassist Hvàll Kvåle contends was a coincidence at first. "We had just started to work in that period, but when we were so close we had to do it on that day ... to have it as a symbolic event felt right," he told Noisecreep.

The Day of Liberation is exactly what it sounds like: a day of celebrating the independence Norway fought for. 'Milorg' is a record themed around the military resistance of the same name that went up against Nazi Germany in World War II.

"They were a very important factor in getting Norway back to being the free country they once were," Kvåle told Noisecreep on the underground operation that inspired their newest album. "The Germans invaded Norway pretty quickly because we had a very weak military defense, but within the people resistance began to grow quite soon. It built slowly and slowly, but the main advantage of this was doing sabotage actions against the German war machine. They had no real money or anything or such, so they went over to England were they got instructions and learned a lot of things and got weapons."

This is not the first time Vreid has focused their lyrics on the second World War or the resistance in their homeland during. "On the second album I began writing songs about World War II," Kvåle said. "I thought 'this is really something we should do an album about. With the 'Krig' album we actually did it in Norwegian [lyrics], but the lyrics were based on poems and didn't tell very much about the actual events, just the feelings of things.

"So I wasn't finished with it just yet. I also thought it was important to tell the story so people outside of Norway could understand it."

Not that many people know about these resistances -- not exactly mandatory learning here in the U.S. -- but it makes sense that there would have been small rebellions against the invasions in the war. "In France they had this kind of movement," Kvåle explained. "I thought it was kind of interesting when we had a day off in New Orleans we went to the World War II museum and they had a lot of stuff on the France resistance movement."

Already at work on the next album war will continue to be the themes of Vreid. "The source of liberation will be the main thoughts of this album, but not just based on World War II," Kvåle speculated. "I think we're going to look a bit back in history and see other periods as well."

Of course a question does come up, and one Kvåle has been asked before by fans, will Vreid ever write about modern wars and modern struggles for freedom? He's attempted it, he said. A few times. "It hasn't been working out yet," he sees the band sticking to the old, but still remarked, "Nothing is certain."