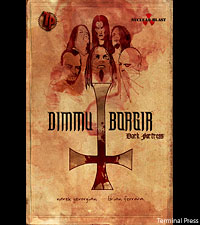 Not many people would think to set the music and look of black metal warriors Dimmu Borgir to the graphic novel medium, but Brian Ferrara, an impassioned metal fan and author of 'Dimmu Borgir: Dark Fortress,' was up for the challenge. "We decided to do the book because I always wanted to crossover my passion for metal into the medium I work in," Ferrara told Noisecreep. "It finally became clear that we could actually make a worthwhile book based on a band. I knew that I didn't want a book that had a band jumping around like assholes, shooting guitar lasers, with dialogue that felt like what a writer thinks a guy in a band would talk, like 'That set was totally rocking!'"

Ferrara does acknowledge the difficulty of translating music and live performance to the comic medium, which can be downgraded to self-parody. "That's what it seemed like most music-based comics had done before us." Ferrara thinks "music and comics are art forms that can amplify and complement the experiences you get out of each when paired together. Most of my favorite albums had awesome cover art that helped set the mood and expectations before I even hit play.

"I wanted to carry the themes and the emotions I got while listening to the music through the experience of reading a graphic novel. I want to play around in a world that these other incredible artists inspired through the use of sequential art and storytelling."

Despite his Dimmu-inspired comic, Ferrara is not the world's biggest Dimmu freak. He is a huge fan of the black metal genre, though. He said, "I'm a big fan of the Dimmu Borgir, have all their albums and have seen them live several times. 'Stormblast' is one of my favorite albums and in my opinion, 'Progenies of The Great Apocalypse' is one of the most epic songs ever written. They could've just written those albums and been considered a great band, but it's the addition of the theatrics, the costuming and the commitment and the effort to present a full audio/visual experience that takes them to a higher artistic level in my eyes."

While Ferrara digs band like Mayhem, Nachtmystium, Bathory, Emperor, Belphegor, Absu, Vreid and Enslaved, he said, "black metal isn't the only genre I listen to. Great metal is great metal." He also exclusively revealed a little tidbit: there is another book on the horizon, and this one will involve thrash.