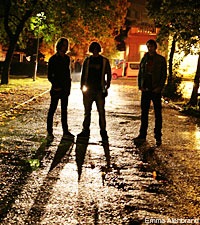 Is it the snow and long cold winters or all the good-looking blond girls? Truckfighters can't say for sure, but despite being geographic opposites of California's once thriving desert rock scene, something is going on in Sweden that has germanium transistors and vintage tube amps continuing to be pushed to their limits. In the tradition of fellow Swedish fuzzsters Astroqueen, Mammoth Volume, and Dozer, Truckfighters are taking things a step further with their third full-length release, 'Mania.'

After two solid releases, 'Gravity X' and 'Phi,' Truckfighters went through two line-up changes and speculation that a third record would never happen. But the core duo of Oz (bass/vocals) and Dango (guitar) were undetered. "We were 100% determined about doing this," Oz told Noisecreep. "We never doubted."

'Mania' is much more than your typical fuzz rock record. While the desert rock influence is there, it is anything but a rehash. It flows effortlessly from sweet and mellow to head-crushing heavy, with captivating melodies and thick and rich riffs that will have you upgrading your speakers to ones that can handle the fuzz that Truckfighters are spewing out. "Mania is more complex," says Oz. "I think you can find everything on this album, from fast or simple to really heavy stuff, and to more progressive sides and also a lot of really smooth and nice melodies."

'Mania' is out May 22 on Sweden's Fuzzorama Records (hear the new single, 'Monte Gargano,' here) with a European tour to follow. Noisecreep talked to Oz and Dango more about their new record, recording in a bomb shelter, and the secret to a killer fuzz tone.

I read somewhere that your first record was recorded in a bomb shelter. Tell me a little about the recording of 'Mania'. Where was it recorded, how long did it take, what was the process, etc...

Oz: Actually the first released recording we did, the 'Fuzzsplit of the Century' (with Firestone in 2003) was recorded in a big gymnastic hall. But, yes the Bombshelter stories are true. We built our own studio shortly after 'Fuzzsplit' and it was in an old war bunker. It was really cool to record stuff there. You get that extra sweaty, dirty rock vibe to it.

The new album Mania was actually also recorded in "Bombshelter Studios" but we moved to a different location, still in a bombshelter though, but this time without the water damage and without all the mold. So I guess this recording session has all that cool rock vibes but without the bad things like mold and water damage.

We were also 100% determined about doing this, we never doubted, despite having lost two members the year before and I think many people doubted that there was going to be an album at all. We never did, so we were really inspired after that year with a lot of chaos. So instead of one year in the studio total, as we had with 'Phi,' we did everything from scratch including mixing and mastering in two months. For some punk band that might sound like an eternity, but not for Truckfighters.

I think we have also grown a lot through the years. We did approx 90 gigs since the last record, Two European tours with Fu Manchu and a total of over 200 gigs from the start. So I think that combined with us getting older and wiser (hopefully) we felt a total calm in what we where supposed to do, the best album in years. We also never try to create something for other people, I mean you can only transform emotions into music in the way you feel at the present time. I don't believe in people doing the same album over and over again. Life changes, people change and the environment changes. That should definitely reflect in the music, if you're true to what you do.

Why did you name it 'Mania'? Does it relate to an overall concept to the record?

Oz: Yeah, I think something like that. The past years since 'Phi' have been like rollercoaster mania for us as a band, with members quitting and such. But the main core in Truckfighters has always been me and Dango, so nothing really changes in the end, it only led to more focus in what we're doing without any distractions.

Dango: When I popped the idea for the name I thought about it as one word with the band name - Truckfightersmania.

Every band always says that their latest record is better than their previous. What makes 'Mania' better than your previous releases?

Oz: Personally I think this is actually the best album in the world, but that's only my personal opinion. The thing is, when we did 'Gravity X' and 'Phi' I thought those where the best albums in the world. But as I said before, everything changes and the music changes with it. That doesn't necessarily means it gets better, just different. But in my state of mind right now I think this is 100% super good. But what I can say is that Mania is more complex, I think you can find everything on this album, from fast or simple to really heavy stuff, to more progressive sides and also a lot of really smooth and nice melodies and parts.

Dango: You always do what you think is best at that point. So if you're happy with what you've done it has to be the best you've done. Then I can imagine in a few years you can look back and say if one album is better than another. But it's really hard to compare as it represents different periods in life.

Oz: I'm not really sure, I've been asked that a hundred of times, And I can't really give you a good answer either, because it all been said before. Maybe it's because of the snow, or all the good looking blonde girls we have. (laughs)

Dango: The long cold winters and our touch of depressive mentality.

It's not easy getting nice smooth fuzz tones such as the ones your band is known for. What is the secret to a killer fuzz tone?

Oz: You might think that an easy way to get a really cool fuzzy sound is to use really cheap and crappy gear and crank it up, but it isn't that simple. We use good solid tube amps. On the latest album we use almost only Hi-watt, custom built UK amps, the best in my opinion. In the past it has been Orange, Ampeg and other such amps. So, top of the line stuff. Both me and Dango uses Gibson, and Dango also uses his old Rickenbacker sometimes. And of course volume, nothing is better than a tube amp at work.

Any plans to tour the US?

Oz: Hopefully, it looks optimistic, but I can't say for sure, sorry... enjoy the album meanwhile!