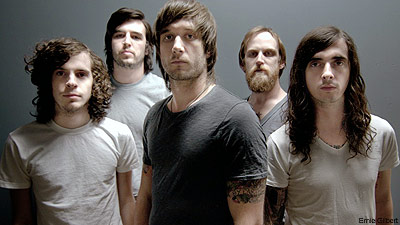 When To Speak of Wolves started, all band members were spread out, but over time a lineup based around the band's hometown of Greensboro, N.C. came together as long commuting members left. "It was fun, we tried to make it work," drummer Phil Chamberlain told Noisecreep of the days the band was spread thin across state lines. "That much distance was $3 a gallon at times making it tough."

With the band all located in the same area and able to practice together, it would be safe to expect the band would enter the studio for the debut full-length 'Myself < Letting Go' with songs fully finished and ready to just have someone hit record. But it was actually the opposite, on purpose.

"We wanted to go in there with that mindset of not necessarily setting our songs in stone until we got there," Chamberlain explained of how they entered into the studio. The band entered with 50 to 100 guitar riffs by estimation that had all been recorded to a laptop. "We took that down there and plugged it into the control room and played the producer all our parts. We talked him before hand and told him we wanted to take it with an open mind and make these songs as good as possible." So they mapped the songs out in the first few days hunkered in the studio building each song riff by riff and part by part rather than just jamming it all out.

"'This riff fits with this riff, so we're going to pull these down here,'" he reenacted the process. "Once we had the skeleton for each song we would go in and lay it down."

This process is not the norm for a hardcore band. It's usual practice for the band to just go in and lay the songs down to their completed vision letting the producer play more as an engineer. This build-as-we-go style is normally how pop groups and your bigger than life metal bands work (i.e. Metallica).

Chamberlain expressed that he's not sure if the band will try this approach next time, but he's ecstatic about how the experiment came out, especially with being able to enjoy listening to the finished album. Usually the songs become tiring and old due to wear in the studio so any excitement to unleash the new songs live is just not there, but with how To Speak of Wolves did it, all the songs are new. Chamberlain laughed, "There are a couple of songs that I legitimately only played when we were tacking them."

'Myself < Letting Go' comes out May 18 via Solid State Records.