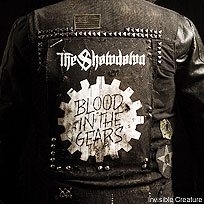 Tennessee's the Showdown have a brand new lineup and will release the beast, their new album, 'Blood in the Gears,' on Aug. 24 through Solid State. The Showdown's brand new bassist Jeremiah Scott produced the platter; he produced the band before becoming a part of their rhythm section. 'Blood in the Gears' follows up 2008's 'Back Breaker' and is the band's fourth album overall.

The Southern metallions have enjoyed some incredible film and television exposure from 'Back Breaker,' with the title track appearing in the horror film 'Legion' and on the Charlie Sheen sitcom, 'Two and a Half Men.'

"It's used in a scene where evil zombies are driving towards normal people and they fling the car door open and they are listening to our music, which is sick," vocalist David Bunton told Noisecreep. As for the song's usage in a family sitcom? "I didn't see it, but it was a short clip, where Charlie Sheen [is] getting down with a girl and the kid interrupted things with our song! I found out that the song was going on the be in the movie on a Thursday. It came out Friday. I went and saw it in the theater. It was fun, too. We never had been in a movie before, and we had tried to get a song in 'Talladega Nights,' but it never happened. I guess we got thrown a bone. It kinda rules."

Bunton would love to see a song from 'Blood in the Gears' on TV's 'Sons of Anarchy' or the 'The A-Team.' Bunton said, "Anything bikerish or horrorish, where they need man metal? They can pick one of our tunes. Anything hesher is great. I love hesher thrash. I wear cargo shorts and high top all-stars like Dimebag."

Guitarist Josh Childers has a different opinion. Given the lyrical content about the social consequences of empires that is featured on 'Blood in the Gears,' a war-based movie would be best served by a Showdown song. "It would fit in something like 'The Hurt Locker,'" Childers told Noisecreep. "The whole record could go there. We were surprised the song 'Back Breaker' got in those places that it actually got in."