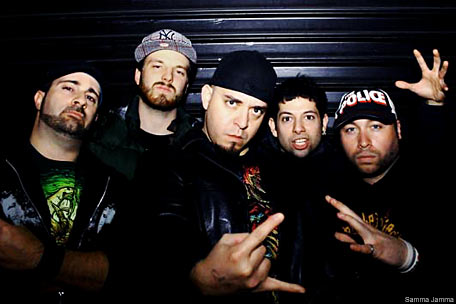 New York City's the Judas Syndrome are getting a lot of love from fellow metal musicians -- like Whitechapel, Emmure and Black Anvil -- so with those ringing, tinnitis-causing endorsements, we at Noisecreep knew we had to premiere the new video, 'Death of the Soul,' from 'Underneath Blood Skies.' To put it simply, the melodically thrashy song slays, as does the video, which was co-directed by Dallas Coyle, formerly of God Forbid.

"The experience of working with [directors] Frankie [Nasso] and Dallas [Coyle] was unique in that we had one person who has always worked behind the camera and one who was always in front of the camera," the Judas Syndrome's Chris Oblivion told Noisecreep. "The combination of the two perspectives created the frenzied hell ride of unstoppable mayhem that we see in the final cut. If you don't feel like climbing a mountain or tearing down the Eiffel Tower after watching this video, then there is something wrong with you!"


While we recommend scaling a mountain rather than taking down a globally recognized monument -- and yes, we recognize the sentiment of metaphor -- we do invite you to bang your head to the track while enjoying the clip. Director Nasso, who has worked with heavyweights like Hellyeah, Mudvayne and All That Remains, also told Noisecreep, "Put the politics of the metal industry aside for a second and embrace this collective work of passion from some of the baddest mother f---ers in the scene today. It was a pleasure working with so many talented, real people on this video."

Oh, and if you were curious, here's what other headbangers have said about TJS:

Alex Wade, Whitechapel: "The Judas Syndrome are bringing back the Thrash era style of metal, and don't give a fuck if you like it or not. Successfully blending influences from At the Gates and the Haunted to All Out War, they deliver a style of their own that is fast, pummeling, and relentless."

Paul, Black Anvil: "The closest thing to the way metal should be played."