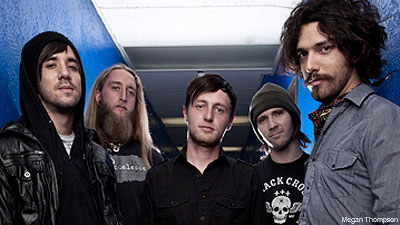 The Bled's scorching new video for 'Smoke Breaks,' from their recently released Rise Records debut, 'Heat Fetish,' takes the fire metaphor a sizzling step further. The vid features the Arizona band cloaked in black suits, knuckling down on their guitars and instruments in the blazing heat of the desert. The clip was directed by Spence Nicholson.

While the members of the Bled appear to be gentlemen draped in nice clothing, their attire also plays to the video's theme about a paper pushing, trapped-in-the-rat-race employee, chained to his desk and stressed beyond belief about his job. While the conventional wisdom behind a smoke break is taking a few moments to unlock the handcuff to your desk, head outside and indulge your nicotine fit, the worker bee in this video takes the concept of a smoke break to a whole other level, dousing his car in gasoline and igniting it.


Set your monitor ablaze and turn it into kindling right now by watching 'Smoke Breaks.'