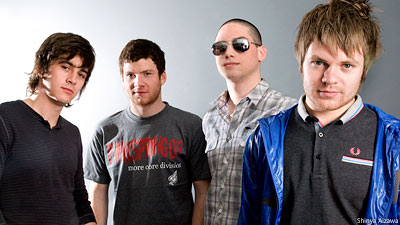 The kids overseas ... they just love Enter Shikari for their spastic, ballsy, whacked out, off-the-wall mix of hard rock, metal, screamo and electronica. In the U.S., however, Enter Shikari haven't quite yet arrived, so to speak. Perhaps during and after their current, 20-city fall tour with the Bled, the band's quirky, hyphen-rock hybrid will be embraced and accepted by American hard rock fans with a hankering for mixed genres.

"It takes a lot longer to conquer the U.S., due to the sheer size of the country," vocalist Rou Reynolds told Noisecreep. "But we're working hard at it! The enthusiasm has been crazy over there, though. The fan base that we're building up is awesome and full of energy. We're looking forward to touring in the U.S. for much of 2010, too." The band is touring its ass off in support of its Interscope debut, 'Common Dreads.'

Enter Shikari will put their noses to the grindstone while trekking across this great country, which leaves little time for touristy traps. They're spending three weeks in a van that runs on vegetable oil! "We have a grand total of zero days off on this tour, which is going to prove interesting for mine and Chris' throats," the singer said. "Dingy venues, dingy van and dingy hotel rooms is all we'll be witnessing this tour."

While rock 'n roll may not be a glamorous life all the time, it sure beats a 9-to-5! "The tour is gonna be a massive slog, but should be a corker." Slog? Corker? For those not well-versed in British slang, slog is colloquial for 'hard work,' while 'corker' roughly means 'excellent.'

Reynolds doesn't think traditional, hardline or elitist metal fans will be quick to sport an Enter Shikari T-shirt, though. However, fringe-loving, hardcore and punk rockers may gravitate towards the band quicker, with Reynolds saying, "Most traditional 'metal' fans probably won't like us no. I don't even really like 'metal,' so I'm not too bothered. Most people that are into both hardcore and punk feel we're pretty refreshing. We get that a lot from most of the older people at our shows, who have seen the same bands again and again for years." .