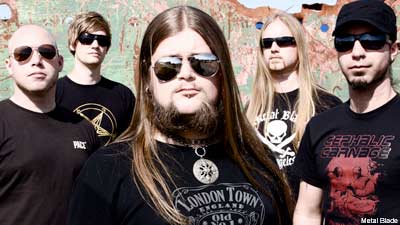 "When I grew up, I was a total black metalhead." Impious drummer Michael Norén tells Noisecreep, explaining the inclusion of Gorgoroth, Dissection and, perhaps, the Black Dahlia Murder on his 'Your iPod Is Showing' list. "The people living in the small community where I was born and raised -- 72 inhabitants to this day -- miles away from civilization, were scared to death of me. Especially when knowing the Norwegian black metal crowd raised total hell only a couple of miles away."

Since those blackened glory days, Norén's tastes seem to have matured. His iPod includes a variety of death metal, including two songs from pioneer Florida band Death, but not all of the songs are old-school, running the gamut from the 1980's to the present day. There's some classic Iron Maiden, some modern extreme metal (Suicide Silence, Job for a Cowboy), some good ol' thrash and even a pair of spoken word pieces from former Black Flag frontman Henry Rollins. "I absolutely love that guy," Norén says. "I think he has a lot of interesting viewpoints on life and society. He's taught me a lot even though I've never met him in person. He's a hero of mine, indeed."

We were kind of surprised to see mainstream rock band Saosin's 'Is This Real' and the trendy metalcore of the Bled's 'Shadetree Mechanics.' And Norén insists there are some far more insidious tracks lurking in the circuitry of his 16 gig iPhone. "I guess I would be pretty embarrassed if my old nu-collection of 40 Below Summer and Ill Niño songs would [have] shown up. But let's not talk about that."

In the end, Norén is pretty content with his list, but regrets that it didn't reveal more Swedish and Scandinavian bands. "There are so many amazing bands from over here," He says. "Another Year, for example. They're a great melodic hardcore band from our hometown Trollhättan. I've listened to a lot of hardcore and these guys are actually probably the best I've ever heard. You should definitely check out their EP from 2005, and even the newer stuff."

While he continues to explore new sounds and expand his sonic horizons in his spare time, Norén looks back with fondness at the days when his only musical color was black. "I used to wear a black leather jacket with a Marduk logo (the one with three sixes and an inverted cross) on the back, big ass boots and black metal shirts and it freaked the s--- out of people. But I remember a music teacher at school who was really cool to me and the guys who I was in a band with back then. He even helped us put up black metal shows at the town square, at school. Goes without saying, but we turned that city upside down for a couple of years."

Misery Signals -- 'Weight of the World'

Henry Rollins -- 'The Shit Is on Fire Show'

The Black Dahlia Murder -- 'To a Breathless Oblivion'

Job for a Cowboy -- 'Embedded'