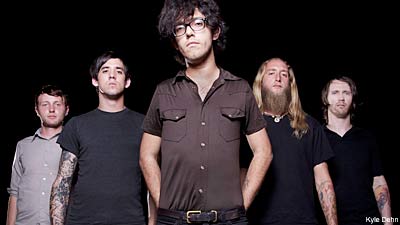 It's looking like fans of Arizona post-hardcore quintet the Bled will have to wait until March to get their hands on 'Heat Fetish,' the fourth studio offering from the architects of 2003's monumental 'Pass the Flask,' which they literally just finished tracking vocals for this week. It will be the band's first album for new label home Rise Records. Now, if you suspected that perhaps the title was a reference to the band's native stomping grounds, you're right.

"We wanted -- since we were writing it and recording it in the desert, and we're form here, we think that's something that's kind of unique about our band -- and we really wanted to capture what its like living here in the music," guitarist Jeremy Ray Talley tells Noisecreep. "Basically, the record is very desert-themed."

Talley says 'Heat Fetish' isn't exactly a return to the band's early sound or even a progression from 2007's 'Silent Treatment,' necessarily. Instead, it's a bit of both; at times, fans will detect hints of 'Flask,' but at others, they'll hear something they perhaps otherwise never would've expected out of them. At no time, though, was any of this intentional, he insists. Instead, losing three of the band's founding members forced the band to readjust.

"There's new members in the band. And before they were in the band, they were fans of the band, so it's been cool to get an outside perspective and bring that into the writing process, and they have a different idea of what kids like about our band, so its cool from that perspective," says Talley. "We just wanted to make a record we'd have fun playing live. That was the main goal."

Drummer Josh Skeebar replaced Mike Pedicone, who left the Bled to play in former Bush frontman Gavin Rossdale's band, while Robbie Burbidge took over for Ross Ott, who works a 9-to-5 gig these days. Darren Simoes, who quit so that he could finish his degree, was replaced by bassist Brad Murray. Of course, the band continues to be fronted by James Muñoz.

"We've got three of our friends from here who we basically grew up with and were in bands with before, so there was no weird transition," Talley says. "They're more than capable musicians, so it wasn't as big a deal as it could have been if we tried to bring in three strangers or put an ad out on MySpace looking for musicians. It was very much a comfortable change."