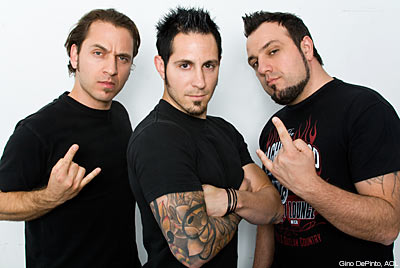 Anew Revolution descended on the ''Creep Show' studio on the eve of the release of their new album, 'iMerica,' which references and explores the digital culture of iPhones, iPods and instant information and accessibility as much it does the "I" and "me me me" thought processes of so many Americans.

Bassist Frank Salvaggio, drummer Rob Urbani and guitarist Jay Frederick popped in -- singer Joey Duenas was stuck in Los Angeles after being grounded and unable to board his flight -- and discussed the plugged in generation and its effect on the grappling music industry, as well as their re-booked 'Economic Stimulus' tour, which helps create jobs in tour markets. It wasn't all doom and gloom, though, as Anew Revolution are a bunch of survivors. 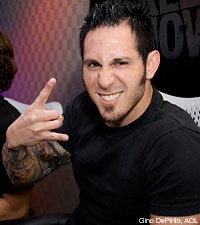 Salvaggio and Urbani, who are originally from Montreal, engaged in a little hockey smack talk with Amy Sciarretto, since the Canadiens and Philadelphia Flyers are currently locking horns and battling each other in the Eastern Conference finals. They also shouted out future ''Creep Show' mascot (and Amy's new bulldog puppy) Higgins, making this another fun-filled, smile till your face muscles hurt edition of the ''Creep Show.'

Anew Revolution also recounted how they got CNN to pay attention, thanks to the band's willingness to let their seams show and to show the plight of a touring band, driving and fixing their own vehicle, which broke down during the massive snowstorms that battered the Midwest this winter. Listen to Urbani talk about trying to repair a busted axle in subzero temperatures. Brrr. We've got chills just thinking about it.