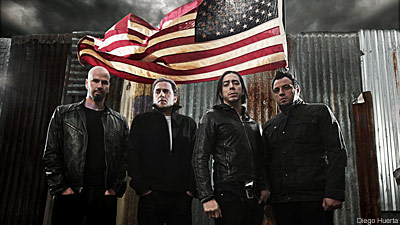 If all else fails in therapy, attack the doctor. That's the rule right? Everybody knows that. Anew Revolution know this, or at least that's the visual crux for the loss of sanity screaming song 'Head Against the Wall.' We here at Noisecreep are very proud to be premiering the first video from the hard rockin' band's forthcoming album 'iMERICA,' and not just because of the great filmed smack downs, headlocks and the no rules crotch kick near the end.

It seems bassist/backing vocalist Frank Salvaggio was very much right saying the band was stepping up the aggression telling us, "In this album, we've decided to channel our live vibe into our new music. It's more emotional and lyrically complex. We've been definitely influenced from some of our metal mentors, like Metallica, Anthrax and Slayer. This album is definitely a reflection of the sacrifices and challenges we all face to get through life and aspire for better things."


May 18 marks the release for 'iMERICA' via E1. And with no time to breathe, the band hits the road with Taproot the very next day in Maine.