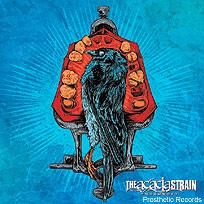 "Because I like drawing birds, I was given a dead one by a friend," artist Justin Kamerer said to Noisecreep about the circumstances surrounding his work for the Acacia Strain's new album, 'Wormwood.' "It had been in my freezer for about two weeks, and then I just had the idea to put it on this weird piece of dental equipment I picked up in Alabama last year and took a bunch of reference photos. I just thought it was sort of weird enough to be cool. After"

It was cool enough to end up on the front of 'Wormwood,' the band's fifth studio album, coming out on Prosthetic Records. The Massachusetts metallers have been making a name for themselves ever since 2002, with the release of their first album, '... And Life Is Very Long.' Their last album, 'Continent,' hit the Billboard charts at 107, and earlier in the year they released a DVD.

Kamerer took some ideas from vocalist Vincent Bennett, using bright colors and an apocalyptic theme. "Originally, the illustration was going to be of a bird flying out of the mouth of a skull," Kamerer explained further of his album art. "As I got rolling on ideas for additional elements to use, we ended up liking this one better for a cover."

"There are some other pieces I like in the album art as well including an illustration of a heart as a bee's nest."

In July, the band will embark on the Cool Tour, which will cover most of the U.S.