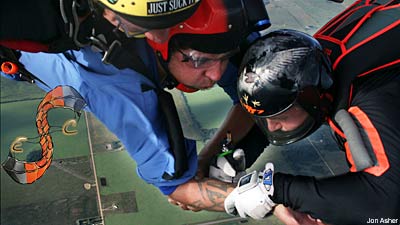 Some band members go to strip joints for on-the-road excitement, but Surefire Machine's Zeke Galt thought it would be cool to get a tattoo while skydiving. The Toronto-based guitarist was supposed to do the jump at Edmonton Skydive Centre back on July 4, but had to postpone due to bad weather and stolen camera gear. This time, Aug.11, the skies were cooperating, but the tattoo gun was not, initially. The successful record-breaking stunt was captured on camera. The raucous rock 'n' roll band with songs like 'Hot Leaded Woman' and 'Truckers Trade' then continued on their Sinnin & Grinnin Tour. Mission accomplished.

You're alive! How did it go?

It was really good. It was a little nuts because we hadn't really tested out the tattoo gun. We only had these two days to do it. It was a little hectic. We did one jump that was kind of failed and the boys fixed the gun and it was good, man.

Who did the tattoo?

Al Christou. He's my friend who owns [Edmonton Skydive Centre], and he was the guy who did the tattoo as well. He is not a tattoo artist. This is only the second tattoo he's ever done. His brother is a tattoo artist though, and it was his brother who designed the gun. He tattooed his brother about 10 years ago and made a little snowflake once, and that was it.

What made you think that not only would it be a good idea to get a tattoo while jumping out of a plane, but to use a guy who isn't even a tattoo artist?

I thought it sounded pretty crazy, and I like to do s--- that's a little weird and a little crazy. I've known Al my whole life, so I trusted him and I thought it would be something fun to do together with an old buddy.

What are the logistics of tattooing at an altitude of 11,000 feet?

We just talked about it and went for it; just made it happen. It was trial and error. We jumped and then we tried it first with a pen just to see, try different handoffs in the air and stuff like that, and then came down and realized we had to do it a different way. Then, we took the gun up and did it again and realized the gun wasn't powerful enough, landed, and then [Surefire Machine bassist Bones Bowman] and Al and my dad -- who was actually here for this thing -- got together and rebuilt the gun. We went up again, and we had one shot to do it because it was getting to the end of the day so we just did it and it worked. That was pretty much it, man.

What tattoo did Al give you?

I had 'SFM' for Surefire Machine written on my right arm just underneath my existing tattoo. My right arm is my rock 'n' roll arm. That's where I get all my stupid s--- done. 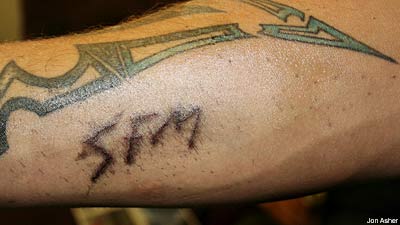 Did you go tandem with Al, and he just reached down and tattooed you?

I was with a tandem master named Mic [Sweeney]. He was the guy I was strapped to, and then we jumped with two camera people [Raina Christou and Sean La Rose] on either side of us. And then Al swooped in and grabbed my arm and tattooed me. We had to do formation and docking and all that stuff. I went tandem because the jump that I got my tattoo on was only my fourth jump ever. We just didn't have time for me to go through hundreds of hours of training [to get the solo certificate].

How many seconds did he have to complete three letters?

Our freefall was a little more than a minute, and I think it took Al about 40 seconds to do this tattoo.

So he did it freeform? He didn't stencil you before you went up in the plane?

There was no tracing other than the failed 'S' that we had before. It was just freefall, freeform, no real discussion about anything. Just go and get it done, and see if we can pull it off.

Was he able to go over the 'S' from the previous jump?

He went right over it because the other needle just wasn't functioning. I was getting a few holes in me, but that was about it, so he just went over the 'S' and blasted off the other stuff.

Does the wind or the temperature or the pressure cancel out the pain?

The adrenaline is what cancels the pain. There wasn't much pain at all, because I'm falling to the ground at about 150 [miles per hour], strapped to another human being who's much larger than me on my back. So I wasn't really thinking of any pain at that moment. My other tattoo that I have on the same arm took about five hours, so that was a little sore, so just a couple of seconds getting some lines drawn into me, that was nothing. But it was a lot of fun, man. The whole time he was doing it, I was just looking around going, "What the hell am I doing here?"

And what was your answer?

I figured I'd answered myself just to do it, something to tell my grandkids. Now I'm trying to think of the next thing to do.

How about just baking an apple pie?

Well, that would be good. I'd put the pie in the oven, and then I'd go do something fun and come back and eat that pie. We're thinking next year on tour about sky-branding.

That will hurt. Why not really live dangerously and try sky-fencing?

We're gonna have a sky-fencing match next time. We're doing it for you. 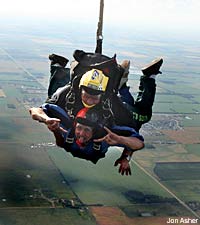 You could do a sky massage. That's way less painful. You could jump with a masseuse.

Tell you what, I'll do a sky massage if you're the one massaging me. You come with me.

I'd actually do it the other way around.

[Laughs] OK, well that's fine with me then. "If I'm jumping out of a plane, I want a god damn massage."

Well congratulations. You didn't die and you've got a tattoo.