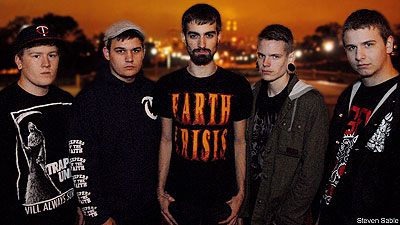 While Slipknot will always be the reason that Des Moines, Iowa even made it onto the metal map when they erupted onto the scene like the alien bursting out of the astronaut's chest in 'Alien,' it's bands like Stand United that continue the 'Knot's legacy. Stand United, who cite influences like Hatebreed, the Acacia Strain, Throwdown and First Blood, have just signed to Eulogy Recordings, despite having released nothing official -- only online demos -- since their formation two years ago.

"We are in fact Slipknot fans and can even hear their influence on us in our riffs," drummer Seth Gagle told Noisecreep. "The Des Moines metal scene 10 years after Slipknot is doing well. There are some up and coming bands from here. Too Pure to Die -- RIP -- on Trustkill also broke a lot of ground for a Des Moines band, and Destrophy just got signed to Victory Records and we just got signed to Eulogy."

The burgeoning metallic activity in America's heartland makes last week's passing of 'Knot bassist Paul Gray that much more painful for a band like Stand United. "It is extremely sad right now in Des Moines for everyone in the metal community with Paul's passing. He would always come to metal shows in Des Moines and treat everyone who wanted to talk to him very well. We even recently purchased our guitar head from him not even two weeks ago," Gagle also said.

This implicit Iowa metal brotherhood is what facilitated Stand United's formation. Too Pure to Die's Jordan Peterson took the band under his wing. "Too Pure to Die was our gateway into the scene. We started coming to Too Pure to Die shows when we were all like 14, and it actually got all of us into straight edge," Gagle said. "When we formed Stand United, we definitely wanted to do what we saw they were doing. As soon as we formed the band, Jordan started helping us get on shows and get our band going. When TPTD disbanded almost a year ago, we asked him to manage us. He is helping produce our album and we hope to get out there and pick up where they left off."

In addition to the Iowa bromances, the 'hardcore scene brotherhood' is also fostered in a simple way. The drummer said, "I think that comes in part to hardcore band's lyrics. Hardcore definitely offers something that no other scene can offer, friendship, values and a sense of community. I was huge into death metal but I knew I was missing something, after I went to my first hardcore show and saw how intense it was and how much fun everyone was having. I knew I needed to be a part of it.

"Then after paying attention to band's lyrics, like Terror, I realized this scene had a lot more to stand by and believe in then just banging your head." He also said that "we wanted to be a straight edge band with ignorant riffs that people just want to smash each other to." Besides wanting to manufacture meatheaded riffery, Stand United cop to being "pretty big nerds." Vocalist Jordan Grenier spends about $40 per week feeding his comic book habit, while the rest of the band says "we don't know what we would do without 'Call of Duty' or 'Halo.'" Even guitarist Brad Millis works at a video game store.