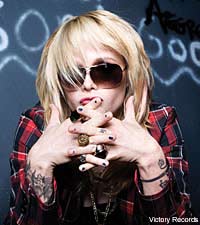 Otep are hitting the road on the Rise Rebel Resist Tour with labelmates Bury Your Dead and Destropy in tow, along with Through the Eyes of the Dead. "World domination" was the eponymous singer Otep Shamaya's answer to Noisecreep's questions about what we can expect from Otep this year. She continued, "But in the meantime, we will be touring and inciting mental riots."

The band's latest album, 'Smash the Control Machine' was released last summer through Victory, and Shamaya said, "The set will be comprised mostly from 'Smash the Control Machine.' We are very excited to play the new material. This will be the first tour ever where we focus mainly on a new album. It's going to be wild." So if you are digging the new album, it makes sense to get your ass out to these shows.

In addition to being a metal singer, a poet and nominated for a GLAAD 21st Century Media Award, Shamaya is also trained in full-body massage. "I am trained in Thai, Shiatsu, chakra balancing," Otep said. "And to quote one of my favorite movies, 'I don't be tickling or nothing.'"

If you don't recognize the quote, we'll reveal the origin. It's from 'Pulp Fiction.'

The Rise Rebel Resist tour kicks off on Feb. 15 in Arizona and runs through April 2 in California.


Filed Under: Bury Your Dead, BuryYourDead, Destrophy, Otep, Through The Eyes Of The Dead, ThroughTheEyesOfTheDead
Categories: Interviews
Comments
Leave A Comment
Back To Top