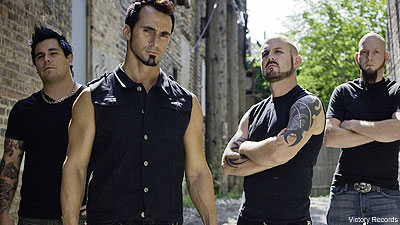 "We were lucky enough to be part of Type O Negative's last tour, along with Kenny and Johnny's side project, Seventh Void," Mihalopoulos said. "The memories of that short run in late October of 2009 are heartwarming and joyous, and for me, that includes getting the opportunity to work alongside and befriend an icon of mine, Mr. Peter Steele."

He continued, "The most important thing that I want people to know about Pete is how humble and kind he was. Although his 6' 7" frame took up most of whatever room he was in, he seemed more comfortable being in the background and supplying choice, witty commentary, most often self-deprecating and always hilarious. My manager became friends with Pete early on in the tour, and arranged for me to come onto their tour bus to meet him for the first time after a show in Hartford.

"His gentle handshake belied his massive frame and he offered me a slice of pizza and tried to make me as comfortable as possible, amid the bedlam of a tour bus crowded with bands and supporters. I told him what a fan I was of his work and our talk ranged from music to his physique of old, which he was anxious to return to. He would intersperse between jokes, over and over, with a serious voice and deadly serious tone, 'If you guys need anything -- if you're sick, if you need any help -- come over I'll take care of you.' I walked out of the tour bus with my manager excited to have met the legend and come away even more impressed with his kindness."

Mihalopoulos also said that the next night's show at Cleveland's House Of Blues afforded him his fondest memory: working out with Peter Steele. "After sound check, Peter popped his head in our dressing room bearing a gift of red wine. The wine had been given to him, but he was to be completely sober and drug-free during this tour and offered it to us," he said. Steele then offered the use of his free weights and he had 50-pound dumbbells.

"I was overjoyed at the opportunity to talk fitness with one of the people who inspired me to be a frontman with an intimidating physique," the singer said. "We picked up the dumbbell for a bit and spoke about his physical ailments: his knees and back, and how he always wanted to develop his shoulders more. I brought up my infamous kettlebells, which, like Pete, had a Russian heritage. He was very interested in them and I could tell he had a great respect for traditional strongmen and the proven techniques of old."

In the meantime, Destrophy guitarist Bruce [Swink] and their manager had gotten one of the kettlebells from the van, and started shooting some video while Mihalopoulos showed Pete how to properly swing and press it. "He picked it up and exclaimed just how heavy and 'dead' the weight was and lifted it a few times, very reverential toward it as a true strongman's tool. I never had a chance to really train him and he was timid to go all out with any of the weights, but afterward we all sat down and he told stories about working out in the back of his bus on the Danzig tour," he revealed.

Steele also told a story of doing bench presses when the Type O tour bus was clipped by the Danzig bus, causing it to tip slightly. Mihalopoulos continued, "Mid rep, he watched helplessly as the room tilted, causing the weight to shift to one side and fall off the bar. This caused the heavy side to fall through the floor of his room, nearly destroying the engine!"

Ari also said that Steele liked to poke fun at their haircuts, saying, "When asked about us on the radio, he said: 'Destrophy. Great guys with bad haircuts.' He also spoke of immense pride at having Steele watch the band perform from the side of the stage on what was one of their best nights on tour, in front of an initially hostile crowd in Clifton Park, N.Y. Mihalopoulos recalled, "Everyone had arms crossed and could have cared less for an unknown band that was getting in the way of them watching their boys in Type O. But we did our thing with as much intensity as we could muster, and I remember looking over at the side of the stage and seeing my hero right there, watching us do our best."

One of the last days on tour, at the Rave in Milwaukee, Steele hung out in Destrophy's dressing room, "just to get away from the noise and the smoke and the drinking. He was outfitted with a sensor on his leg that would detect any alcohol in his body, even to the point of certain perfumes, and this would have violated the terms of his parole," he said. "He seemed to enjoy the relative calm of our dressing room, content to tell a few stories and jokes, always making fun of himself. He talked about how he used to drink a bottle or two of wine to get himself ready for stage to deal with his nerves, and how now he understood as a sober person what it's like to deal with people that are drinking."

Manager Damon Moreno had become quite close to Steele during the tour; he was a rabid fan, having seen them 12 times prior. "He wanted people to see the new Peter Steele -- the newly sober man, fighting to get his life back on track- and offered to shoot a question and answer session with him so that Pete's fans could see where his head was at and to talk about his plans for the future," Mihalopoulos admitted. "Pete was very excited about this idea and did the video, and the footage is wonderful and gives great insight into Pete as a recovering alcoholic, his thoughts on religion, and in general, gives an endearing profile of a very penitent man."

Another memory from the tour circles around the H1N1 epidemic. "Phil [Tschechaniuk] had become very sick, in fact having to leave the stage during our Chicago performance on October 30 several times to throw up into a trash can, while still playing the bass parts," he said. "Noticing that Phil was ill, Pete snuck in our dressing room with a pile of Pepto and allergy meds and said that Phil could ride in the tour bus if he needed. Pete repeatedly asked us to all come onstage and 'help them' with the chorus to their finale, 'Black No.1.' It took me until that Chicago date, the second to last show, to finally have the courage to get up there with Joe and the other guys from Seventh Void and gang vocal it, but I always appreciated how emphatic he was and how gracious he was to share the stage with us."

The final show Harpo's in Detroit found everyone in Destrophy suffering from a nasty cold, complete with coughing and nausea. "I decided to head home as quickly as possible, so I never got to say a proper goodbye to Peter," Mihalopoulos recalled. "I saw Johnny Kelly on the way out and told him 'thank you' for the opportunity and what a pleasure it was to meet everyone. Johnny lamented that I never hung out enough, and this was very true, as I'm actually a very shy person and have difficulty mingling with the partying alphas and adapting to their world. But I am thankful that I was able to spend a great deal of quality time with a fellow shy guy: a humble, respectful, and wonderful human being; our friend, Peter Steele."