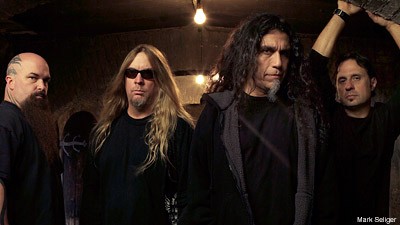 When we heard late last year that Slayer frontman Tom Araya needed back surgery and the band would have to postpone their long awaited Canadian and American Carnage dates with Megadeth and Testament, we were disappointed like everyone else. But we knew it was just a temporary setback. There was no way a back injury was going to silence the mighty voice of Slayer.

A few months after going under the knife, Araya is feeling pretty good and looking forward to getting back on the road, he told Noisecreep's ''Creep Show' in his first interview since Slayer stopped touring in October 2009. And he's feeling more metal these days than ever -- literally. Slayer's vocalist now has a titanium steel plate attached to his spine and held together by screws.


Although the band has downplayed the seriousness of the surgery, it was by no means a minor procedure. It was actually a last resort decided upon after two separate painkiller injections failed to heal the injury. Doctors had to go in through the front of Araya's neck to conduct the operation, which, though complex, was completely successful. Araya told us he felt better almost immediately after and has steadily been on the mend ever since. He didn't even use the painkillers doctors gave him when he left the hospital.

Araya said that his back injury was caused by decades of headbanging and the abnormal positioning of injured discs in his neck was due to his particular style of helicopter and figure eight headbanging. He added that although he can still sing and play bass as well as ever, he will headbang no more.

During our candid interview, Araya discussed the experiences that led to Slayer's decision to leave the road and postpone the Carnage shows, the grisly details of his surgery, the support he has received from fans and friends and specific plans for the upcoming Carnage dates and European tour.

Watch the excitement that went down on Good Friday and check out the latest update on Slayer's summer tour.