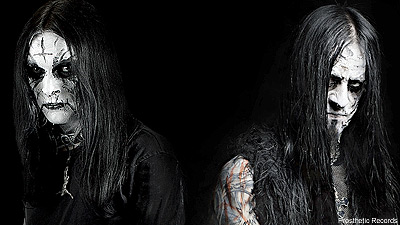 King ov Hell -- one of the greatest black metal nom de plumes in the genre's sordid history -- is not only busy with Ov Hell, his project with Dimmu Borgir singer Shagrath, which just released 'Underworld Regime' via Prosthetic. King has his mitts in many pots and is staying musically solvent.

"I will release Sahg's third studio album in September," King told Noisecreep. "I am also making music for an upcoming album with [Gorgoroth singer] Gaahl, and I am doing a band with Dani Filth, [producer and Anthrax guitarist] Rob Cagganio and Ice Dale, which will hopefully be released 2011. What is happening after that, I cannot predicate as of now."

So black metallers can sleep soundly knowing that King -- who sports corpse paint and plays nefarious metal at night and is a primary school teacher in his native Norway by day -- has a lot of dark art pouring out of him. Wonder if his students are fans?