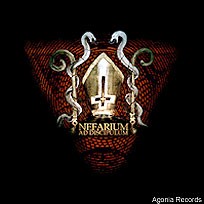 The self-proclaimed "firestorm of heresy and hatred" will be the follow-up to 2008's 'Haeretichristus.' The new album features eight tracks recorded at Alpha Omega Studio in Tortona, Italy this winter. The disc was mixed and mastered by Andy Larocque (King Diamond, Ancient, Trident) at Sonic Train Studio in Varberg, Sweden.

The band formed in the latter half of the 1990s and, according to their MySpace, have a concrete philosophical goal: "In an apathetic and driven world, powered by hypocrisy, the members of Nefarium seek their personal illumination and to give the most adequate voice to their own ideals, there where the darkness is greatest -- to avoid limits and pre-conceptions and to grow spiritually towards a single and univocal truth, going beyond all questions and all answers."