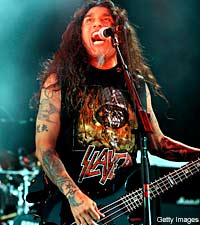 Oh, the horror! The year and nascent decade's most anticipated metal tour package -- the American Carnage Tour, featuring Slayer, Megadeth and Testament -- has been postponed due to health issues being faced by Slayer vocalist/bassist Tom Araya. The tour was scheduled to kick off on Jan. 18.

"Tom gave various medical treatments more than a fair shot," said Slayer's manager Rick Sales in a statement. "But they just haven't handled the problem, so he's biting the bullet and is scheduled for back surgery at the end of this month."

Booking agents for both Slayer and Megadeth are said to be working on rescheduling the dates for the future. Tickets already purchased for these shows will be honored at the rescheduled dates.

Araya began experiencing back problems last October while on tour with Australia, New Zealand and Japan. He was diagnosed with Cervical Radiculopathy and while he did not want to have surgery initially, it has become unavoidable.