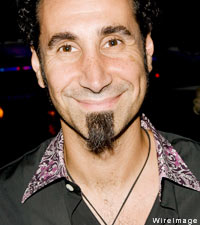 Uncross those fingers. System of a Down will not be reuniting, according to frontman and solo artist Serj Tankian, who recently dispelled the rumors in an interview. "We always have offers to play, from festivals and stuff, but we have not decided to do anything as of yet," Tankian says. "We're in touch. We talk. We call it an indefinite hiatus, and that's how we still look at it. Nothing's really changed."

Fans rejoiced earlier this month, when a posting made to the Twitter account of System bassist Shavo Odadjian hinted that, after four years of a self-imposed hiatus, the Tankian-led foursome would be resurrected. The tweet read, "Are u guys ready for System???" The band announced it would be taking a break in 2006, after a summer spent headlining that year's Ozzfest. But it looks like System will remain on ice for some time.

That's because Tankian will release a sophomore solo LP called 'Music Without Borders' before year's end. Tankian has been in the studio recording the effort in recent weeks, and the disc should be completed by late March. Tankian has been handling the bulk of the instrumental and production duties himself, but has recruited several guest musicians, including Jimmy Urine of Mindless Self Indulgence, to help with the sessions.

"It's a new genre of music in some ways," Tankian explains. "It's electro orchestra jazz-rock. It's basically a full orchestra, full, heavy electronic beats, live instrumentation and resampling ... You name it, it's there. It's a huge wall of sound."

Download System of a Down Songs
Filed Under: @verizon, Serj Tankian, SerjTankian, system of a down, SystemOfADown
Categories: News
Comments
Leave A Comment
Back To Top