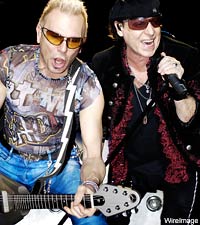 German rockers the Scorpions have announced that after more than four decades together, they'll be throwing in the towel. Founded in 1965, the band -- best known for their early 1990s hit 'Wind of Change' -- claimed that "we agree we have reached the end of the road."

The Scorpions will release a final album, called 'Sting in the Tail,' which will drop in March. The band will be touring in support of the disc, starting in Germany this May. They promised the farewell tour will span the world "over the next few years."

In the band's statement, they said that "it was always our pleasure, our purpose in life, our passion and we were fortunate enough to make music for you -- whether it was live on stage or in the studio, creating new songs." While working on 'Sting,' "we could literally feel how powerful and creative our work was -- and how much fun we were still having, in the process. But there was also something else: We want to end the Scorpions' extraordinary career on a high note."

The Scorpions expressed extreme gratitude for "the fact that we still have the same passion for music we've always had since the beginning. This is why, especially now, we agree we have reached the end of the road. We finish our career with an album we consider to be one of the best we have ever recorded and with a tour that will start in our home country Germany and take us to five different continents.

"We want you, our fans, to be the first to know about this," the band added. "Thank you for your never-ending support throughout the years!"

The band's site features several snippets of material from 'Sting in the Tail' that you can check out now.


Filed Under: @verizon, scorpions
Categories: News
Comments
Leave A Comment
Back To Top