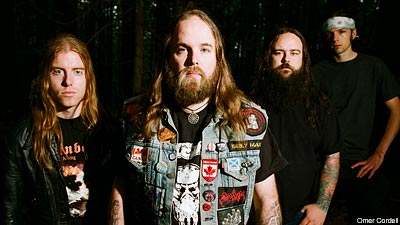 Shane Clark, guitarist for 3 Inches of Blood, admits that he doesn't love hockey that much anymore. Wait ... isn't that a crime punishable by death in Canada? Isn't Saturday night known as 'hockey night' for our neighbors to the north? However, there's a reason for Clark's change o' heart about his country's sport du jour.

"I was a huge hockey fan," the guitarist tells Noisecreep. "I played hockey for eight years. I played defense. But then I got interested in music in junior high. There was a recession in the 1980s, and it really is an expensive thing to play hockey. So I told my folks, 'I appreciate the support but I am not into it anymore, so save your money.' The equipment, the fees to join leagues ... those are pricey. When you are a kid, you don't think about it."

Clark's love of the sport began to wane on the professional, NHL, level after some of the antics in the battle for Lord Stanley's Cup in 1994 -- something that should spark the ire of New York Rangers fans! While Clark still wishes the Vancouver Canucks well, he is past the point of being able to name all the players on the roster! "During the Stanley Cup playoffs, it was the Vancouver Canucks and the New York Rangers," Clark recalls. "I thought that last game was pitiful because of the referees. You could tell somewhere along the line, that someone was bought. The last game was so pathetic. It looked like WWF. It looked like it was a play. I am talking about it like it's a fresh wound. That's the last time I was a diehard."

Things like expansion teams have aided in Clark's disinterest in the sport, too. "The more teams there are, the more room for mediocrity," he points out. "There are less good players, and there are hockey teams in cities that aren't interested in hockey and that don't have winters. Come on! The Tampa Bay Lightning won the Stanley Cup!"