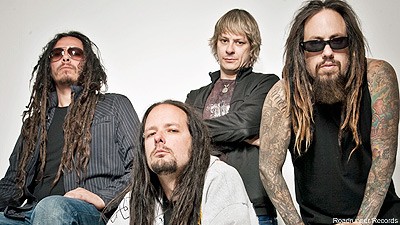 The first video from Korn's upcoming record, 'Korn III -- Remember Who You Are,' 'Oildale (Leave Me Alone)' premiered on May 31 on MTV2. To mark the occasion, the band hosted both 'Headbanger's Ball' and 'Rock the Deuce.'

"We thought it was fitting to have the first single and video from 'Korn III – Remember Who You Are' be 'Oildale (Leave Me Alone),' since Oildale is near where we grew up as kids," vocalist Jonathan Davis said. "It's a poverty stricken area surrounded by endless, rich oil fields. The money doesn't really help the local people, and it's tough for local kids to get out of there. I feel blessed that our music busted us out."

'Korn III -- Remember Who You Are' comes out July 13 and will be the band's ninth studio album and first with new drummer Ray Luzier (Army of Anyone). Like the band's first two platinum albums, 1994's 'Korn' and 1996's 'Life Is Peachy,' the disc was produced by Ross Robinson.