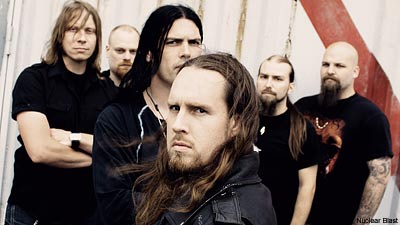 For their latest effort, 'Dark Matter Dimensions,' Scar Symmetry wanted "more of an in-your-face and organic sounding album this time around, and I think we managed to create an album like that. We kind of lost some of the edge and aggression on the previous album and now we`ve taken it all back! I mean, we`ve kept all the key ingredients of our sound on 'Dark Matter Dimensions,' but we've taken it all one step further by writing better songs than ever and bringing in some cool stuff that you haven`t heard before in Scar Symmetry," drummer Henrik Ohlsson told Noisecreep, offering a teaser of info about the new album.

On the band's forthcoming tour, they will play a mix of new and old songs, and promised "to give the fans what they want. And also performance-wise, we`ll do our very best to make the fans happy. There will probably be surprises, but if I told you about them they wouldn`t remain surprises, right?," Ohlsson said coyly.

While on tour in support of 'Dark Matter Dimensions,' one thing is for sure. Ohlsson will miss his four canines, who given their breeds, will undoubtedly be protecting his homestead while he is away. "I love them like children!," he said. "Three of them are related to pit bulls. One of them is an American Staffordshire terrier and one is a Staffordshire Bull Terrier, and one is a mix of those two. Most of people think that those dogs are mean f---ers, but they are nothing compared to my fourth dog, which is a Cane Corso."

According to Ohlsson, a Cane Corso is an Italian guard dog that "the Romans used to keep their slaves in place and also for gladiator entertainment. So trespassers beware!"